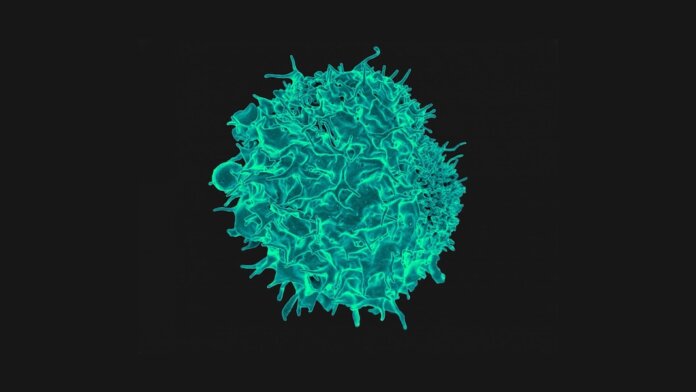 A new cancer therapy is a match made in heaven.

On one side is CRISPR, the gene-editing technology that’s taken genetic engineering by storm. The other is a therapy called CAR-T, which transforms normal immune cells into super soldiers that hunt down specific cancers.

Scientists have long sought to combine these two big advances into a “danger zone” for cancers—a cellular fighter jet that hunts down precise cancer cells and takes their, cough, breath away. (Top Gun, anyone?)

The idea is relatively simple: CAR-T uses genetic engineering to endow immune cells with advanced tracking powers targeting a certain type of cancer. CRISPR is the tool that inserts those tracking genes into the immune cells.

But practically, the duo is the “most complicated therapy ever.”

The genetic edits are tailored to attack a person’s own cancer, and each of their tumors is dotted with a specific set of proteins. Now, in a study in Nature, a team based at the University of California, Los Angeles tested the treatment in 16 people with various cancers, such as breast or colon cancer. With help from a custom algorithm, the scientists designed a brigade of genetically engineered immune cells to target and destroy each person’s particular type of cancer. These cells can home in on personalized protein targets, while sparing healthy tissues.

Within weeks, the team found that the edited immune cells had elbowed into the cancerous tissues so much that the engineered cells constituted 20 percent of the cancer sample. It’s not a silver bullet—this first trial is just to assess safety. But it shows that the CRISPR and CAR-T team-up is feasible in cancer patients. The study is a first step toward potentially overhauling current cancer treatments, making them more personal and efficient and causing fewer side effects.

“It is probably the most complicated therapy ever attempted in the clinic,” said study author Dr. Antoni Ribas at the University of California, Los Angeles. “We’re trying to make an army out of a patient’s own T cells.”

Like all cells, cancerous cells are dotted with a cloak of proteins outside their membrane. Some proteins camouflage them as healthy cells. Others give them away. A main goal in eradicating cancer cells is to home in on these unique cancer protein “beacons,” which aren’t present in healthy cells. This makes it possible to wipe out cancers, while leaving normal cells alone.

From chemotherapy to immunotherapy, we’ve taken a good stab at targeting tumors. There’s no doubt that the treatments have saved lives. But the therapies also take a drastic toll on the body, largely because they can’t discriminate cancers from other fast-growing cells, such as stem cells.

“In the patients we see in the clinic with cancer, at some point the immune system kind of lost the battle and the tumor grew,” said study author Dr. Stephanie Mandl, chief scientific officer at PACT Pharma in South San Francisco, California.

“The human immune system is uniquely suited” to eradicating cancers while sparing other cells, the team said. T cells, a part of the immune system, are particularly good killers that can hunt down cancers using a “spyglass” protein called the T cell receptor, or TCR. Think of TCR as the ultimate biological surveillance camera: it can detect just a single DNA mutation that marks a cell’s cancerous turn.

The problem is these immune cells are easily overwhelmed: with over 24,000 different mutations in cancers, T cells can’t keep up with all of them. CAR-T is a way to boost their ability to recognize specific mutations. Dubbed “neoantigens,” these proteins flag cancer cells because they’re not present in normal ones. Translation? Neoantigens are perfect targets for CAR-T.

The team started with two samples from each patient: one from the tumor, and the other from the blood. It sounds strange, but the blood cells provided a “blank slate” of normal genetic data as a background over which the researchers could hunt down mutated genes in a cancer sample. The result was a surprising smorgasbord of mutations, with up to 500 in some patients.

“The mutations are different in every cancer,” said Ribas.

With data in hand, the team used an algorithm to design several potential CAR-T therapy targets—the neoantigens, or neoTCRs. Each was specially picked to trigger a T cell attack, eventually building a team of CAR-Ts with over 175 new cancer cell protein targets.

It’s risky business though. CAR-T rewrite’s the body’s immune system, which can lead to severe side effects. The team is well aware: they first tested the neoTCR candidates in healthy donor T cells inside petri dishes, to eventually settle on three cancer targets per patient. In other words, each patient had their T cells engineered to target three cancer sites.

Enter CRISPR. The team took blood from each patient and isolated their T cells. They then treated the cells with CRISPR to wipe out two immune-related genes and inserted those that encode the neoTCRs. It’s a biological bait-and-switch: the newly powered up CAR-Ts are now, in theory, dedicated cancer hunters that won’t harm normal cells.

Overall, it was a pretty quick process: the team increased the population of engineered super-soldier cells over just 11 days. After the patients took medication to limit their normal immune cell numbers, the team infused the engineered cancer fighting cells into their bodies. Taking several blood draws, the team found high amounts of the edited cells circulating inside their blood and nestled around their individual tumors.

The trial was mainly to assess safety. But the patients seemed to benefit. One month after the infusion, five people’s cancer had stabilized—that is, their tumors hadn’t grown—and only two experienced immune side effects from the treatment.

“This study… is important, as the first human trial in solid cancers showcasing the use of patient-specific, CRISPR-engineered T cells that are able to identify specific antigens, or ‘flags’ on the patient’s tumor cells, prompting them to kill them,” said Dr. Astero Klampatsa at the Institute of Cancer Research in London, who was not involved in the study.

Although CAR-T has had meteoric success in treating blood tumors, the technology has struggled when it comes to the solid tumors in most cancers, such as breast, lung, or stomach.

The study doesn’t present the ultimate cure. One patient had an immune reaction with a fever and loss of white blood cells. Another experienced a temporary inflammation in the brain that led to problems walking and writing, but they recovered rapidly upon treatment. And although a high level of engineered T cells correlated with some, but not all, cancers that had decreased in size, how the therapy can aid long-term recovery is yet unknown.

Still, for now, the team is hopeful.

Looking ahead at the next generation of CRISPRed CAR-Ts, the team is envisioning cells that metabolically spark to life as a tumor grows nearby, alerting the body to a potential cancer. Another idea is to guard the genetically enhanced cells against cancer warfare. Tumor cells can send out signals that suppress immune cells—a genetic barrier could give us the upper hand, allowing the engineered cells to last longer as they patrol the body for signs of cancer.

These are ideas that the team is working on. But for now, “it would be interesting to see whether this therapy will be applied in a bigger trial, where efficacy, but also the experimental protocols, can be further tested,” said Klampatsa.