Astronomers Just Confirmed the Most Ancient Galaxies Ever Observed 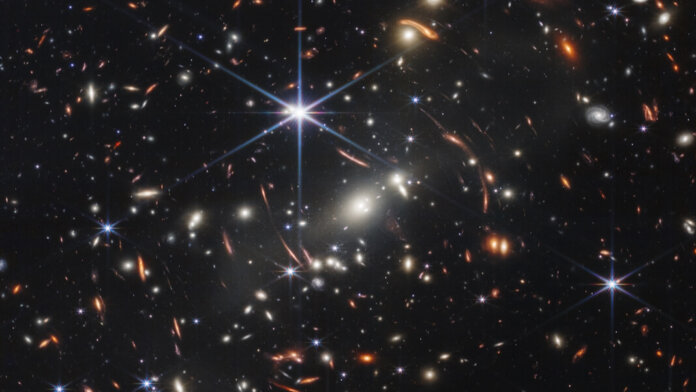 When a group of photons struck the nearly flawless mirrors of the James Webb Space Telescope earlier this year, they’d been traveling the void for 13.4 billion years. The light was emitted from distant galaxies at a time when the birth of everything we know and see was still, in a cosmic sense, recent history. Ancient doesn’t really do it justice.

Webb’s first deep field images—infrared recordings of minuscule patches of sky, jam-packed with galaxies—sparked a scramble among astronomers to find the oldest galaxies in view. The Hubble Space Telescope held the existing record with observations of a galaxy from when the universe was just 400 million years old. Webb’s larger mirrors and ability to see into the infrared parts of the spectrum were designed to do better.

On Friday, the telescope proved its mettle when a team of scientists—jointly known as JADES, a collaboration between the builders of two of Webb’s instruments, NIRcam and NIRspec—announced they’d confirmed observations of the oldest galaxies yet.

“For the first time, we have discovered galaxies only 350 million years after the Big Bang, and we can be absolutely confident of their fantastic distances,” said Brant Robertson from the University of California Santa Cruz, a member of the NIRCam science team and coauthor on a recent paper on the work.

“It’s very possible for closer galaxies to masquerade as very distant galaxies,” said astronomer and coauthor Emma Curtis-Lake from the University of Hertfordshire in the United Kingdom.

Thanks to NIRspec, in two recent studies (here and here), the teams were able conduct spectroscopic analysis—the gold standard for confirming the distance and age of these incredibly faint early galaxies—for a range of candidates. Though neither study has yet been peer-reviewed, the findings very likely beat Hubble’s record.

The sliver of sky observed is about the size of the queen’s eye “on a pound coin held at arm’s length,” Liverpool John Moores University’s Renske Smit told the BBC. Within that eye are almost 100,000 galaxies, each captured at a moment billions of years ago.

To measure the age of a galaxy near the beginning of the universe, scientists measure its “redshift.” As light travels, the expansion of the universe stretches out its wavelength, drawing it into the redder parts of the spectrum. Some of the most ancient light has been stretched out of the visible spectrum and into the infrared—Webb’s specialty.

The oldest galaxies are not only visible in the infrared, but their spectrum also cuts off at a specific point due to the scattering of intergalactic hydrogen. Faint infrared galaxies exhibiting this cutoff, which moves with greater redshift, filled out a pool of candidates. The team then dedicated 28 hours’ observation time to 250 of these with NIRspec. This detailed spectroscopic analysis included specific atomic signatures and nailed down the redshift.

Four galaxies proved exceptionally old, with redshifts greater than 10. Two showed redshifts at 13, from a time when the universe was around 330 million years old. The team says these galaxies are small, just a hundred million solar masses, and made up of young stars less than 100 million years old. The Milky Way, by comparison, is thought to have at least 100 billion stars, and the sun is some 4.6 billion years old. Despite their diminutive size, the team says these early galaxies produced stars at a prodigious rate, as much as 10 times faster than similarly sized galaxies nearer to the present day.

These galaxies now hold the record for oldest ever spectroscopically confirmed, but the title may not last long. Though still awaiting confirmation, scientists have estimated some galaxies already captured by Webb are even older, and Webb was designed to see light from epochs as early as 100 million years after the Big Bang.

By studying the earliest stars and galaxies, scientists hope to learn more about galaxy formation and to pin down a period in the universe’s evolution known as reionization, when the strong light of the first stars ionized surrounding gas by stripping electrons from hydrogen and helium. As the stars in these four galaxies may have begun forming as much as 100 million years earlier, this first generation of stars may date back to as early as around 230 million years after the Big Bang.

“With these measurements, we can know the intrinsic brightness of the galaxies and figure out how many stars they have,” Robertson said. “Now we can start to really pick apart how galaxies are put together over time.”