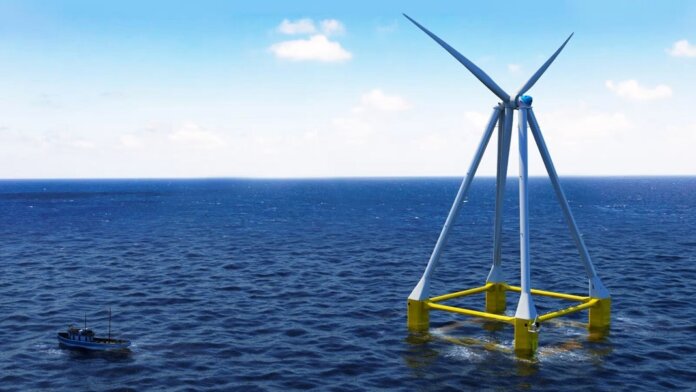 As the focus on a transition to renewable energy intensifies, wind farms are being touted as an optimal way to produce electricity. Wind energy is emissions-free (once the turbines are up and running), sustainable, and relatively efficient; turbines are increasingly dotting both the landscape and seascape.

But wind energy’s pitfall is that it’s expensive, particularly offshore. Some studies have gone so far as to proclaim offshore wind’s “dismal economics” unsustainable, particularly without massive government subsidies to keep it afloat.

Rather than giving up, though, some companies are trying to innovate their way through this problem. One of these is a French startup called Eolink, which is building a five-megawatt floating turbine.

The floating part matters because transporting, installing, and maintaining an enormously tall and heavy turbine in the ocean depths is costly and difficult. Traditional turbines have their generators located at the main axle near the top of the support tower. This adds a lot of weight at the top of the tower, and the blades themselves are already heavy enough. All that weight needs to be offset by even more weight at the bottom (and significant strength along the tower’s entire height) to keep the whole thing from toppling over or bending in half.

What if the weight could instead be distributed between multiple support poles? That’s the design Eolink has in mind; its floating turbine swaps out the single large pole for four thinner ones angled towards each other in a pyramid shape. This not only distributes the weight of the turbine’s pieces, it allows the whole structure to be lighter.

The turbine Eolink plans to build as a proof of concept will have a generating capacity of five megawatts and weigh 1,100 tons. Its base will be a square with each side 171 feet (52 meters) long, and its rotor’s diameter will be 469 feet (143 meters). For reference, that’s about one and a half Big Bens, or four-fifths of the Washington Monument.

You wouldn’t think that such a huge piece of machinery would be simple to build and transport. But compared to conventional offshore turbines, Eolink’s design does carry a myriad of advantages in terms of both cost and ease.

For starters, the turbines can be built at a shipyard and towed to their intended location by a ship; since they’re not as heavy, they can be placed in shallower water than conventional offshore turbines. For maintenance, the turbine can similarly be towed back to a shipyard, rather than having to send people, robots, and ships to labor at sea for days on end.

Eolink estimates that 67 turbines a year could be built in a single shipyard. The company says its design will use about a third less steel than a traditional turbine with the same capacity, and thanks to a longer distance between the blades and mast, could produce 10 percent more energy at equivalent wind speeds.

The turbines are tethered to the ocean floor, and within the limited space that this allows each one, the whole structure can turn 120 degrees to orient itself into the wind; in other words, the blades will always be spinning as long as there’s even a little bit of wind blowing.

The company says it’s starting construction of its demonstrator turbine this month, deploying it in the spring, and commissioning it in 2024. They also hope to eventually scale up to a 20-megawatt turbine with the same design.

Eolink isn’t the only company trying to make offshore wind profitable and thus sustainable. A Swedish company called SeaTwirl is developing vertical-axis offshore turbines (and completed a seven-year-long trial of its technology earlier this year), and an American company called T-Omega Wind is working on a floating pyramid design similar to Eolink’s.

Whether these companies’ hard work will truly make a dent in the fight to reduce emissions remains to be seen. But it seems something needs to change with offshore wind, and finding ways to make it cheaper seems like a crucial piece of the effort.