Many people have heard of the original X Prize, which was a $10 million prize given to the first company that could build a spacecraft capable of carrying three people to 100 kilometers above the earth’s surface, twice within two weeks. Many people are unaware that this original X Prize has since spawned an entire family of other $10 million X Prize challenges that are ongoing today.

The Archon X Prize is offering $10 million “to the first Team that can build a device and use it to sequence 100
human genomes within 10 days or less, with an accuracy of no more than
one error in every 100,000 bases sequenced, with sequences accurately
covering at least 98% of the genome, and at a recurring cost of no more
than $10,000 per genome.”

The Archon X Prize will accelerate mankind’s efforts to achieve affordable and fast sequencing and analysis of the DNA for every individual on the planet. Once this capability is a reality it will unleash a revolution in our ability to make people healthier, fight disease, and even improve people beyond their original genetic and biological bodies. 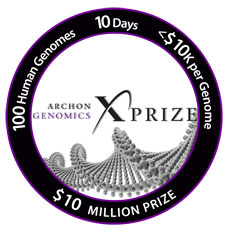