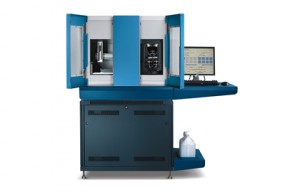 Singularity Hub predicts the cost to sequence an entire individual human genome will plummet to an astonishing $1,000 by the end of 2009 and the time required for sequencing will require less than one week.  The ability to sequence entire genomes for $100 in a matter of days or hours is not far behind, probably only two to three years away.

Many might mistakenly think that genomes are already being sequenced for $1,000 by companies like 23andme and decodeme, but these companies do not offer full genome sequencing.   Instead they only analyze a few hundred hot spots in your dna called SNP’s that can tell you lots of interesting things about your dna, but not the whole story.  Fully sequencing every single one of the approximately 3 billion base pairs of your dna is a completely different scenario.

Virtually nobody is talking about the $1,000 milestone happening in 2009, but here at the Hub we think it is likely.  The sequencing of DNA has been broken down into a brute force computational problem that is rapidly being economized and streamlined by relentless advances in information technology.   A host of upstarts and established players are poised to break new barriers for sequencing speed and cost effectiveness in 2009.  Some are already making claims that are closing in on $1,000 for a human genome:

When looking back on the last 18 years of gene sequencing advances we can see an accelerating trend of advancement:

The Human Genome Project, launched in 1990 resulted in the first complete sequencing of a human genome.  This first human genome was fully sequenced in 2003 (13 years later) with the aid of an estimated $300 million and the collaboration of thousands of people, corporations, and institutions.

In 2007, only 4 years after sequencing the first genome, the entire genomes of not one, but two people (Craig Venter and James Watson) were sequenced for a cost of roughly $1 million each.

In 2008, only one year later, it appears that at least 3 human genomes have been completely sequenced, one of which was the first female to be fully sequenced.  The sequencing successes in 2008 took less than 1 month and cost roughly $60,000 to complete.  Wow! 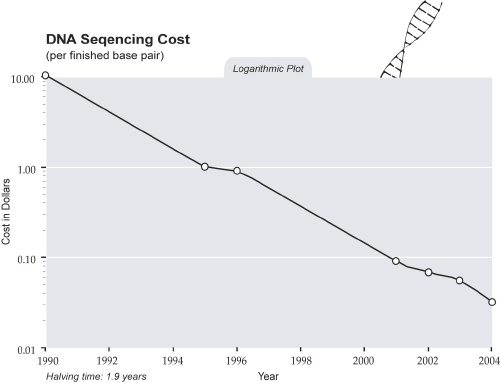 source: The Singularity is Near, by Ray Kurzweil

Although the chart above only goes to 2004, we would expect that the trend has continued through 2008.  In fact it has, but what will be surprising to many (even those that are in the industry) is that the trend of doubling performance every 1.9 years has accelerated to a far greater pace in recent years.  As an example, Applied Biosciences (mentioned above) is claiming to offer a new generation sequencing system that has 6 times the performance of the previous model from 12 months ago!  In 2007 it cost roughly $1 million to sequence an entire genome, and in 2008 it cost roughly $60,000, which is a 17 fold increase in sequencing performance after one year.   At this accelerated rate of advancement the $1,000 milestone will be eclipsed much sooner than many realize, likely in 2009 and with virtual certainty in 2010.

We are in the midst of a revolution…an explosion in ability to analyze the entire dna sequence of individuals.  Cheap, fast, and ubiquitous sequencing of human genomes is now an inevitability that is only years away….that is the easy part.  As Emily Singer points out the hard part will be doing something useful with this new flood of information.  Naysayers will claim that very little medical advantage has been gained so far from the several individual human genomes that have been sequenced in the last decade, but this sort of thinking is naive and short sighted.  The medical and technological breakthroughs that will accompany widespread, cheap, and fast human genome sequencing will be far reaching and stunning, but they won’t come in 2009.  It will take a number of years for us to unlock the secrets that are hiding in all of the data that will be unleashed.

To read more, check out these excellent links:

Picture at top: The Solid DNA Analyzer From Applied Biosciences