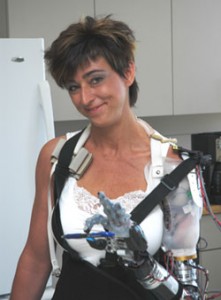 Last year we reported about the latest efforts to create the next generation in prosthetic arms.  Without a doubt the most exciting feature being developed for this new generation of arms is their ability to interface directly with the patient’s brain, allowing the patients to operate the arm simply by thinking.  Today the Rehabilitation Institute of Chicago (RIC) has announced that it has made significant progress in making these brain controlled prosthetic arms a reality.

The major advance behind these prosthetic arms is a surgical procedure called Targeted Muscle Reinnervation (TMR) that reassigns the nerves that once controlled the patient’s arm and hand to the patient’s pectoral muscles.  Hand and arm signals from the patients brain can then travel into the pectoral muscle and be fed into a computer, which converts the signals into inputs for the prosthetic arm.  This transfer of brain intentions into signals that can control a robotic device is known as Brain Computer Interfacing, or BCI.

Creating the ultimate prosthetic arm is a daunting challenge, requiring an interdisciplinary collaboration across many fields to achieve success.  The BCI advances used in this prosthetic arm would be useless without accompanying advances in robotic arm agility and function present in the project’s DEKA robotic arm.  We reported on the DEKA arm last year.

See the prosthetic arm in action in the video below.  Remember, this arm is being completely controlled by the patient’s thoughts.  Note the electrodes on the pectoral muscle where the brain’s signals have been surgically re-routed for capture: