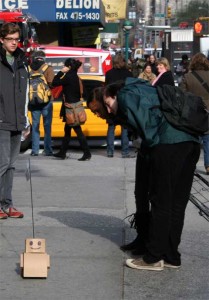 Would you help a lost robot? Just picture a tiny, cardboard skinned automaton making its way down the streets of New York City, asking for help. No chance it would survive, right? If someone didn’t steal the thing, cruel strangers would probably guide it into traffic. Right?

The recent Tweenbots experiment (see the video at the end of this post) by Kacie Kinzer at Tisch’s ITP program shows that humanity is a lot more helpful and loving than we give it credit for. At least when it comes to cute robots, and I have to admit these little tin-men were pretty darn cute. Kinzer designed several of these disposable robots that are little more than motors wrapped in cardboard, carrying a flag. That flag informs onlookers where the robot wants to go. Those strangers help guide the little bot to its destination.

Trailing the robot from a safe distance, Kacie Kinzer used a hidden camera to record people’s responses to her little adventurers. The results were surprisingly touching. When the robot was caught under a bench, or behind an object, strangers would straighten it out and head it in the right direction. Others would notice the bot headed towards a hazard and prevent its destruction. One man actually talked to the bot, warning it not to go towards the road. In the end, each and every Tweenbot made it to its destination.

That success ratio is 100% greater than Kinzer’s expectations. She built each bot to be disposable because she thought that most, if not all, would be destroyed without ever reaching its goal. The total path of the bots was only about 1000 ft and the location was Washington Square Park (not the most dangerous part of Manhattan by far). Still, the Tweenbots’ survival is somehow reassuring.

Honestly, I’m not sure what the broader implications of Kinzer’s test might really be. Maybe that humanity is ready to accept and assist machines as long as they are anthropomorphic. For a long time Japan has had a love-affair with its robot heroes, and Tweenbots may show that the sentiment has spread to the U.S. In the end, I think that Tweenbots say less about the human technology interaction and more about how humans view themselves. We all fear being lost, and so we all want those who are lost to find their way home. And that’s a big part of how robots are going to part accepted as part of everyone’s lives in the future. We will accept artificial life by seeing it as a reflection of ourselves. With the guidance of humanity, not all robots who wander will be lost.