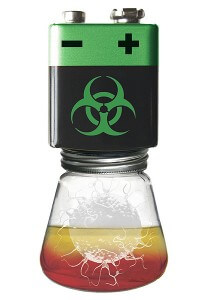 Microscopic workers of the world unite! There’s a trend floating around laboratories: designing tiny mechanisms that can build other devices from the atomic level up. The concept isn’t new, but we’re finally seeing some real progress in the field. When most people think of these tiny workers, there’s just one word on their mind: nanobots. But we’re here to tell you that the playing field is much wider than that. Biology is getting into the micro-worker game.

Some could give you a cold, the Swine Flu, or Ebola, but viruses may just end up being humanity’s best tool. Researchers at MIT have created the next generation of battery assembled using special genetically engineered viruses. These batteries are close to out-performing the lithium-ion standards used today, and will soon exceed them in scale and power. Better yet, the virus built batteries are green-energy — constructed without hazardous chemicals or waste. Who knew that viruses could help save our environment?

Of course, no virus comes out of the wild willing to make batteries. You have to rewire the little guys to become happy workers.

That’s where Dr. Angela Belcher comes in. She’s the head of MIT’s Biomolecular Materials Group and the genius behind the virus-built batteries. Belcher added two genes into a virus called M13. These genes caused two changes: the virus built amorphous iron phosphate (a-FePO4) into its shell and the virus started hunting down and attaching to single-walled nanotubes (SWNTs).

For those of you who know your chemistry (no, not the relationship kind), you’ll recognize these materials as key ingredients in building better conductors. The mixed structure of SWNTs and amorphous iron phosphate creates a great cathode (negative end) of a battery. By using these materials, the viruses create a battery that has lower toxicity, lower cost (based on materials), and is more stable than current lithium-ion technology. In short, these viruses kick the Energizer Bunny’s® butt.

And the viruses work for free. Once you get the genetic modifications correct, they just need materials. You place them in water with some ions and they build a battery the same way that other organisms build shells. As Belcher points out, that’s one of the big benefits of using biological tools: they follow their genetic instructions and work on their own. Another benefit is that selection and evolution help you improve your tiny workers again and again.

But wait, you say, you’re afraid of what these viruses might do if unleashed on the world. Can’t they mutate into a terrible disease? Might they stop building batteries and start building weapons of mass destruction? Couldn’t these little electronic-minded viruses one day develop into *gasp* Decepticons™?

Let’s get the facts straight. These viruses are bacteriaphages, meaning they hunt down and eat bacteria, not humans. Second, Belcher and her cautious colleagues have only adapted two genes. Just two, so there is little chance of rampant mutation. Last, the viruses are relatively fragile things, that’s why the process to make the batteries has to be so environmentally friendly. The little guys would die off otherwise. In short, there’s no reason to be afraid of these engineered viruses, they just want to build you batteries. Won’t you let them try?

Right now the batteries can only handle being charged and discharged about 100 times, and there’s just enough power for a LED. Belcher thinks that once she and the rest of her crew can get the batteries working on a larger scale, however, we will see virus-built batteries powering laptops, cell phones, possibly even electric cars. It’s for potential like this that Dr. Belcher was named one of Rolling Stone’s 100 People Who are Changing America, and why she’s been featured on NPR and the BBC. In the end, it’s not just the viruses who are doing all the work.