Genetic birth defect screening is about to get faster, cheaper, and more comprehensive – all at once. A new technique could soon make genetic defects a thing of the past… and replace natural conception altogether. So much for the birds and the bees.

Newborn screening has become nearly ubiquitous in the US, but many couples want to prevent genetic disorders altogether. For years, preimplantation genetic diagnosis (PGD) has allowed couples to ensure the health of their child. But a new screening technique called karyomapping is going to improve prenatal diagnosis in basically every way,

replacing traditional PGD techniques. Karyomapping will allow doctors to detect both chromosomal abnormalities and single gene defects with a single test, making it a near-universal embryo screening. The technique should go into regular use by the end of the year.

To perform PGD, doctors take oocytes (immature ovum cells) from the mother’s body and fertilize them in vitro, or in test tubes. Once the embryos have developed, each one is biopsied and tested for various genetic disorders. When a healthy embryo has been identified, it can be implanted into the mother and carried to term, disorder-free.

Current PGD techniques can test for about 350 disorders, but doctors must first determine the exact DNA mutation that is common in a family. Once the mutation is identified, a custom test must be developed, which can take weeks or months. Karyomapping can identify any one of the 15,000 genetic conditions we know of, and it can currently take as little as 3 days. The technique currently costs the same as traditional PGD (a few thousand dollars), but the price will likely drop soon, bringing it within reach for more and more families. 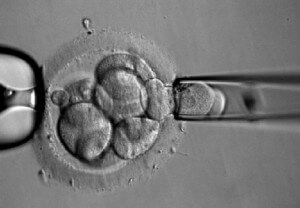 Karyomapping compares the embryo’s DNA with genetic samples from family members to determine how inherited disease has passed down the generations. Over 300,000 areas of the genome are analyzed using microarray chip technology. Literally every genetic disorder we know about can be detected, and the test doesn’t have to be patient-specific. That makes it cheaper, quicker, and better than current PGD techniques (and more viable for widespread use).

Normally, separate tests are required to detect gene defects and aneuploidy (an abnormal number of chromosomes). Karyomapping can screen for both, which should speed up the doctor’s visit. Improvements in vitrification methods will allow doctors to freeze embryos at the blastocyst stage, which gives them time to run the screening. This means that fewer embryos will need to be vitrified as compared to traditional methods, which will improve efficiency (and thereby costs).

Besides the regular debates over embryonic ethics, prenatal screening always brings up the whole Gattaca prospect: that soon, every one of your traits will be hand-chosen by your parents, doctor, or government. Previously, we’ve covered the designer baby debates, making the point that the issue is here to stay. Parents have already chosen their child’s gender, and more traits will likely follow. It’s worth mentioning, however, that outside genes aren’t added (just one parent’s genes chosen over another)… sort of like fixing the dice.

Regardless, these technologies will continue to become more widespread, especially as new techniques like karyomapping make it more accessible. If there’s a time to have the ethical debate, it’s certainly now. But it’s important to consider that more and more often, genetic disorders won’t need to be treated; they’ll just be prevented altogether. A future in which genetic disorders have been eradicated altogether is one worth fighting for, and that’s becoming a reality. Pretty cool.

Who’s to say in vitro fertilization won’t become more widespread as it becomes easier and better? Couples could increasingly choose IVF over natural conception to ensure their child’s health. Maybe some day, gambling with old fashioned genetic recombination will be considered child cruelty, an unnecessary risk that carries a social stigma. What if natural conception was actually illegal?

Would you ever consider karyomapping your kids? Why or why not? What if you could be 100% sure they would be free of any and all genetic diseases?

We’ll continue to report on genetic screening (and designer babies, of course) as this young and exciting technology continues to develop.