Apple needs to learn some reverse psychology. If you don’t want people to talk about something, you shouldn’t go around telling them to stop talking about it. Recently, Gawker/Valleywag offered a bounty on substantiated information about the (supposedly) upcoming Apple Tablet. What’s it look like? What are the specs? Is it white or black? You’ll get $10k for real photos, $20k for video, $50k for a photo of Steve jobs holding the tablet, and $100k for letting Gawker play with it for half an hour. This little scavenger hunt has garnered some attention from Apple’s lawyers. Gawker recently revealed a cease and desist letter it received from Michael Spillner of Orrick, Herrington, and Sutcliffe in Menlo Park. Spillner argues that the scavenger hunt is tantamount to industrial espionage and is either illegal in of itself or is encouraging others to commit illegal acts or break contracts. The pleasantries, polite legal threats, and stern warnings of Spillner’s letter give us reason to wonder: is the Apple Tablet real or is Apple just really cautious about trade secrets? Maybe both. Decide for yourself after reading the letter in full after the break. 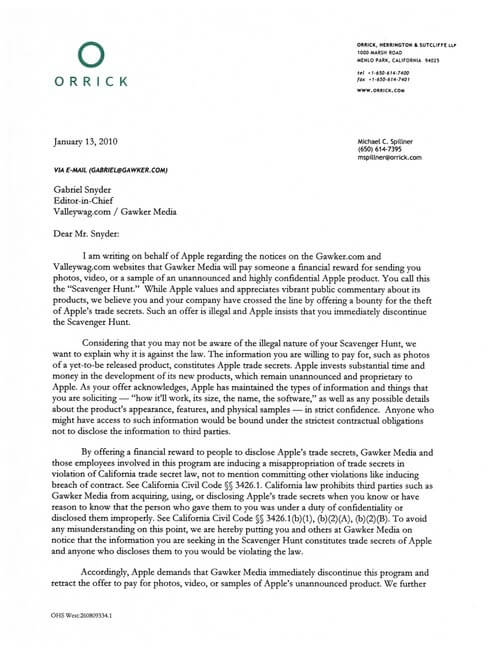 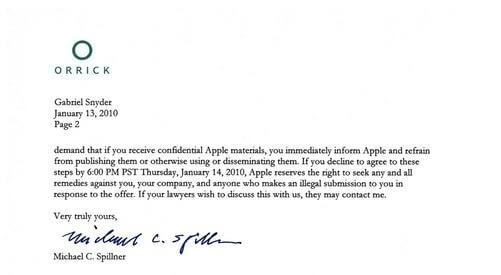 Needless to say, Gawker has continued the scavenger hunt. In fact, Gabriel (originator of the scavenger hunt) had the moxy to send Spillner a “consulation prize”: a DVD of Legally Blond 2, a $25 Zune giftcard and a set of steak knives. Got to admire a blogger with more bravery than brains.

In any case, Singularity Hub is pretty convinced that an Apple Tablet is a really awesome idea. There are zero confirmed facts about the alleged device, but the possible capabilities it could include, and Apple’s history of groundbreaking consumer-pleasing technology, make us excited for the prospects. Even if Apple isn’t entering into the tablet game, you can bet others will continue to move the field forward. As someone who sits at a desk all day, I wouldn’t mind the chance of taking my work on the road with a really reliable and cool form of the computer genre. I’ve never liked laptops, but maybe the next generation of tablet computers will hold my interest. Chances are that I will get an opportunity to find out soon.