Building an Internet of Things (video)

Massive data collection could change the world. Companies all over the globe are working on ways to use tracking and internet connectivity to give new digital life to physical objects and locations. French company Violet‘s special stamps trigger email alerts and messages when you move items around your house. Drop your keys on a sensor, and your spouse can know you got home safely. ioBridge gives you the hardware and software to hack together devices that let your Twitter Feed control your TV, or allow your garage door to have a Facebook Status. Sense Network‘s CitySense App lets you use GPS tracking on phones to find the hottest nightspots in the city. WideTag’s WideNoise is a free iPhone App that let’s you record the volume of your surroundings and share this on a global map. This is just the beginning.  Our objects have things to say, and these companies are aiming to get nearly everything you own to share that information. We have an internet of people, now we are starting to build an Internet of Things.

Take a moment and imagine a future where every object you own has a presence on the internet. Your car would have a Facebook status (“just hit 3,000 miles, need an oil change”), your shoes would appear on Google Maps, even your toothpaste would tweet (@shoppinglist you’ll need more of me soon). This is one aspect of what many are calling the “Internet of Things” (IoT), an ever growing flood of data from our objects that would track their existence from design to recycling bin. It’s not as anthropomorphizing as I make it out to be. The IoT would primarily let you know where everything you made was built, who designed it, where it’s been, and how it can be reused/recycled when you are done with it. Even now you probably know most of these things about your car. Soon you’ll know the same for almost everything you own.

What’s the practical application for such massive data collection? For the producer/designer it presents an unparalleled opportunity to understand and target their market. Customer #29903 just sent our product into the trash, query him/her to see if they’d like a replacement at a discount and find out if he/she was satisfied. For the consumer/user, the IoT would provide a way to personalize service and find the best products for your needs. Which of these smart phones should I buy? I know, I’ll ask each phone how any units they’ve sold, which of my friends own them, and what kind of customer reviews they’ve received. Moreover, the Internet of Things will allow each object to communicate “peer to peer”, opening up even more possibilities. Once the IoT is formed it will be fascinating to see what developers create using the new object based information. There are likely many projects that will only suggest themselves once we are already surrounded by this new flow of data.

Let’s take a look at some of the early applications of the IoT. Violet has stamps (ID tags) that you can stick onto any object. Pass that object over one of their Mir Ror sensors and your computer will automatically send email alerts, or update social networking accounts in whatever means you desire:

But let’s get off the tether. What’s something that people take everywhere and can already be easily tracked? Smart phones. With the Internet of Things, your smart phone turns into a people tracker, a portal for information, and a remote control for…just about everything. WideTag crowd sources noise pollution tracking with their WideNoise iPhone App. Sense Network uses the device to track crowds of people at night, giving users the ability to find the most popular places to hang with CitySense. In New York, their other product, CabSense, uses vast stores of data to predict  the best street corner for hailing a taxi at any given hour or date.

That same smart phone could be used to remotely access any device with internet connectivity, and in the future, many more objects will have such connectivity as they become part of the Internet of Things. We’ve already seen Willow Garage hook up their robots to the web, ioBridge will let you do the same for almost any electronic device in your home. Texas Instruments engineer Matthew Morey put one of their IO-204 boards to (good?) use by connecting a LCD display board to his Twitter Feed as seen in the video below. We’ve also seen the same technology used to track electricity use or remotely access toy guns.

Another pending application for the IoT is massive data collection for scientific research. Huge numbers of cheap sensors could be dispersed around the globe to get real time data on climate, pollution, energy consumption, animal life…almost anything. OpenSpime has an interesting idea for tracking carbon levels around the world. Pachube, which has many interesting IoT software applications under its belt, is even tinkering with combining augmented reality with IoT sensors to help you quickly track the data they collect.

As these videos suggest, not only will your objects be talking with each other, to you and to their producers, you’ll also be able to share the information they collect in your social network. You can leverage social pressure to help you with everything from weight loss to clothing choices to finances.

In the near term, Large corporations are going to love the Internet of Things as it will let them manage their vast collections of valuable merchandise. There are already a host of tech based companies looking to become the source for IoT solutions. WideTag, Pachube, SenseNetworks, and others have platforms for tracking massive data flows from objects. FedEx already has their SenseAware system for tracking the not just the location, but also the condition of their packages (including humidity, temperature, etc). IBM has a number of IoT projects in the pipeline including package tracking (with Container Centralen), car tracking (with Volkswagen), and a blog that regularly discusses using RFID and sensor tracking to save the world.  As RFID tags become cheaper and data flow more easily managed, more and more inventory will be logged onto the Internet of Things.

It’s hard to express just how big of an idea the Internet of Things really is. Science fiction author Bruce Sterling (to whom, quite coincidentally, I am distantly related) helped shaped the concept of the IoT back in 2004 with a single word: spime. In the future, Sterling postulated, we may see objects tracked through the entirety of their existence through both space and time – hence, spime. A spime exists before it is physically made: it is a design on a computer, a set of datapoints that can be printed into a magazine, or woven into a blanket, or played as music. You can buy and sell spimes, you can update them, you can catalog your favorites. Eventually, when the time is right, you can make them into a physical object. Later, after a spime is no longer desired its physical form is broken down, used to manifest other spimes, and it returns to a purely digital form.

Sterling’s writing on the subject, Shaping Things, was a manifesto about how computer aided design, 3D printers, RFIDs, GPS tracking, data-mining, and advanced recycling will change the way we make things. Every physical object is really just a segment, a window of space and time, of its associated spime. Just as before its manifestation, the spime is mainly about data, during its physical life the spime will still be about data. RFIDs will be embedded in almost everything, letting them be tracked by GPS, letting computer systems gather information on their use, and dictating the best way they can be broken down to make new physical objects. In other words, the Internet of Things is really an Internet of Spimes.

In the Internet of Things you are constantly rating what you own, constantly interacting with other people who have bought the same spime. You make suggestions about how it could be improved, and designers will follow those suggestions. Quickly. They’ll have to because all the other designers will be looking to leverage the amazing personalized markets that spimes create. With spimes and the IoT you become a user, an expert, a stakeholder in every object in your world (digital or physical). Every spime is an investment of time and it pays dividends in custom-tailored enjoyment. We’ll become more concerned about the minute details of our possessions because the those details will be mutable. The future is interactive, it’s extremely dynamic, it’s personal. The future is spimes. 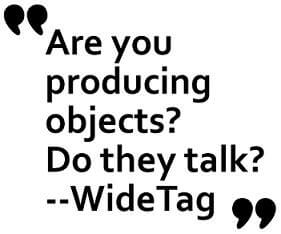 Smart companies are already looking to the possible future of design that Sterling (and others) have suggested will arise. They’re poised to take advantage and guide the IoT trend. WideTag, for instance, has an open source communication protocol (OpenSpime) so that anyone can have the basic shell by which data flow can be exchanged. Yet they have a commercial solution (WideSpime) that will wrangle this massive data flow so that companies can start to harness the fledgling Internet of Things.

The earliest implementations of the IoT that you will likely see will involve objects (or groups of objects) that represent a large capital investment. Already your car is tracked from cradle to grave through ID tags (sometimes even RF tags), service systems like OnStar, and value guides like BlueBook. Industrial machines will be similarly tracked – WideRMS is a system by which you can record the environment of a machine (temperature, humidity, fuel consumption, emissions, etc). As RFIDs become smaller and cheaper and easier to use more objects you purchase will be tracked. Later, 3D printers will allow you to create objects on your own (manifesting the associated spime), embed the appropriate tags and manage their information. Eventually, we may use programmable matter (a material than can form into any shape for any purpose) as the means by which spimes become real world objects and can then be recycled into any new spime you need. It’s an insanely complex system full of ungodly amounts of data, but its advantages are clear: almost everything you own will be smart. Your possessions will conform to your exact preferences and minimize your resources to exactly what you use.

If the Internet of Things and Sterling’s spime concept seem too far out there to believe, don’t worry. It’s sneaked up on you without you noticing. With cars, phones, and other GPS enabled devices, we already have a Mini-IoT. That fledgling system of connected and tracked objects will expand, though I have no idea how big it will eventually get. Will we even see the creation of a nearly universal Internet of Things? The signs of its approach are already here. Haven’t you noticed the personalized ads you receive in your Gmail, and in your web browser? At the grocery store, along with your receipt, haven’t you received coupons that target your specific purchases? When you buy something, especially online, don’t the producers want you to rate it, suggest it to friends, and fill out surveys? Do you use Twitter, FourSquare, or Yelp? The data mining has already begun. Our gizmos (think smart phones) are already recording where they are and what they have done. These trends are building, and they could be going somewhere fast.

The Internet of Things is Near?