The New York Times reports that last week the FDA announced plans to regulate commercial genetics companies like 23andMe and deCODE. The agency sent (and posted) letters to five major genetics companies, claiming their services fall under the FDA designation of a “medical device” and must therefore be regulated federally. The FDA is calling on each company to either apply for federal approval or explain why they are exempt, igniting debates over how the dawning age of personal genetics will fit into existing structures of medical regulation.

Among the letter recipients are 23andMe, deCODE, and NaviGenetics, all companies that test for genetic variations linked to ancestry, disease susceptibility, and potential drug responses. Also tapped was Illumina Inc., a company that sells DNA chips for other companies to use (e.g. 23andMe uses customized versions of their chips), and Knome Inc., which offers complete genome sequencing and has scanned more genomes than any other company in the world. This round of letters wasn’t exactly unprecedented; last month, Pathway Genomics Corp., which markets an at-home saliva genetic test, received a similar letter.

We often report about new frontiers in the genetics revolution – the amazing success of prenatal screening, the dawn of synthetic genomics, chasing the causes of autism and developing new cancer treatments. The acceleration of discoveries in genetic technology is dizzying, and not just for the curious layperson. Legal and legislative institutions have faced the new challenge of making unprecedented decisions about how to regulate these emerging technologies. Can you patent a gene? Can employers or insurance companies peek at your genome? Or, in the present case, does a DNA kit count as a diagnostic tool? These are social, ethical, and political questions that didn’t exist twenty years ago, and our government has been scrambling to address them as they emerge.

The issue at the center of the FDA’s crackdown – what qualifies for federal regulation – has traditionally been determined by how widespread a device or service is.  Generally, FDA approval is required for any medical device that is widely distributed for use in laboratories, doctor’s offices, or sold in stores (Pathway was attempting to sell saliva kits – which we previously described in detail here at the Hub – at Walgreen drug stores).  Companies like 23andMe argue that their genotyping takes place in-house, and should therefore be exempt from federal red tape (the FDA pointed out that the company’s saliva kits are sold on Amazon). Esther Dyson, a board member at the company, has even called the FDA’s position “appallingly paternalistic.”

But distribution isn’t the only issue at stake.  A more interesting question is whether your personal genome is currently a tool for diagnosis – and if not, when it will be. As we’ve covered recently, the state of the union is less than perfect. Commercial genetics companies interpret their customers’ genomes by means of correlation studies; any particular genotype is “associated” with a disease because it is found in higher proportions within diseased populations. This kind of probabilistic genetics isn’t the same as understanding the molecular mechanisms by which genes act, much less the environmental factors involved in a final phenotype. Today, with a few exceptions, a genome scan cannot diagnose much more than statistical likelihoods. 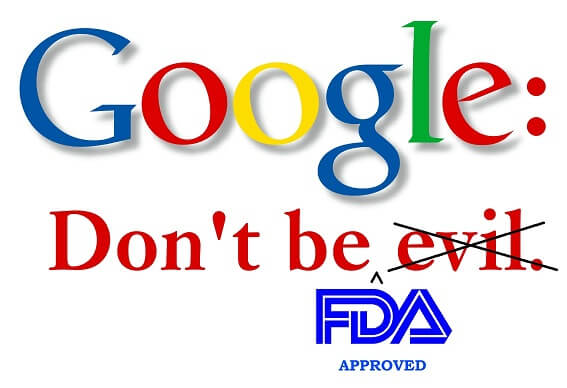 But this will change. As genetic testing gets cheaper, research will accelerate and begin to unlock how gene expression contributes to certain diseases. As a genome scan becomes a real diagnostic tool, it will need to be regulated just as other medical devices are. In this sense, the FDA’s move is preemptive to the changes which will come. I’m tempted to think that 23andMe’s resistance has more to do with the open-source philosophy it shares with its partner, Google. It’s your genome, you should have unregulated access to it, etc. Putting peoples’ health into their own hands resonates well with the brave new world these companies envision: less top-down control, no Microsoft-esque middle man, don’t be evil, all that. The FDA here plays the part of big brother, prying into what is frankly between you and your commercial genetics provider.

Do we want a wild zone of laissez-faire freedom when it comes to genetic technology? Probably not. The industry is changing so rapidly, and in such unpredictable ways, that regulation will be essential to addressing the emerging ethical and social concerns that accompany such powerful technology. But the danger is that regulatory systems are inherently conservative, notoriously slow to adapt to rapidly changing fields – information technology and biotechnology being prime examples. Outdated and sluggish regulation will restrict innovation, slow progress, and increase costs in a tangle of decades-old red tape.  The FDA must coevolve to meet the unprecedented needs of regulating a fledgling market without clipping its wings.

Even if a genome scan can’t currently determine very much, that doesn’t mean people aren’t already making medical decisions based on their results. This trend will increase as our understanding of gene expression gets better. The accuracy of these tests should come under closer scrutiny as they become more and more instrumental to our diagnostic processes and healthcare decisions. Commercial testing will need to be regulated eventually – what remains to be seen is whether the FDA can adapt to this new landscape as fast as it changes.