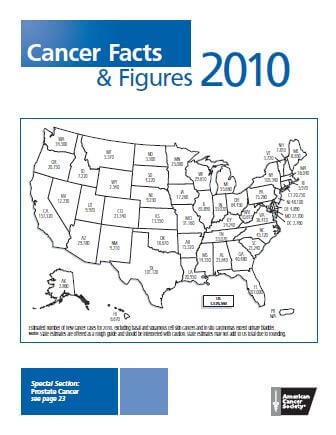 The annual report from the American Cancer Society shows that US cancer death rates continue to decline in both men and women. Since this trend began in the early 1990’s, over 767,000 cancer deaths have been avoided. Researchers claim that the decline in cancer-caused death is associated with early detection, better treatments, and reduced smoking rates.

Most cancer deaths in men are caused by lung (29%), prostate (11%), and colon/rectal cancers (9%). The number of deaths caused by these cancers is on the decline; together, they account for 80% of the dropping death rate. In men especially, lower smoking rates have contributed to the decrease in lung cancer. Early detection has also had a big effect, with more men receiving regular prostate exams and colonoscopies to catch and treat cancer early.

Research at the ASC suggests that in 2010 alone, there will be 1,529,560 new cancer cases and 569,490 cancer-related deaths. Women are most likely to die from lung (26%), breast (15%), or colon/rectal cancer (9%). While lung cancer death rates in women have stayed roughly the same, decreases in breast and colorectal cancers account for 60% of the overall decline. Again, early detection through mammography and colonoscopy has been largely credited with the lowered rates.

It should be noted that these dropping rates of incidence and death are not equally enjoyed across the population. African American men are still much more likely than white men to get cancer (14% higher incidence) and to die from it (34% higher death rate). African American women are less likely to get cancer, but more likely to die if they do, than white women. These demographic discrepancies are credited by the ACS to unequal access to quality healthcare, including being diagnosed in later stages of disease.

Cancer is the second leading cause of death (after accident) for children under the age of 14. However, survival rates for pediatric cancer have drastically improved in the past few decades. A child diagnosed with cancer between 1975-1977 only had a 58% chance of surviving for five years. Between 1999 and 2005, that likelihood increased to 81%. As research is underway to unlock the genetic causes of pediatric cancer, there is good reason to expect that incidence rates will decline in future years as well.

Many of these trends are the consequences of policy and healthcare shifts that took place decades ago. Some of the most exciting research on cancer is being done today: new treatments are not only treating existent tumors, but preparing the immune system to fight cancer before it starts. We’ve reported on the new BiovaxID vaccine for non-Hodgkin’s lymphoma, as well as gene therapy that teaches the immune system to fight melanoma (and can be watched in real time). The new drug Crizotinib is being used to inhibit genetic mutations in lung cancer patients, which has been effective in 90% of patients.

It will be interesting to see how these new treatments alter cancer incidence and mortality in coming years, especially if cancer vaccines can get off the ground.