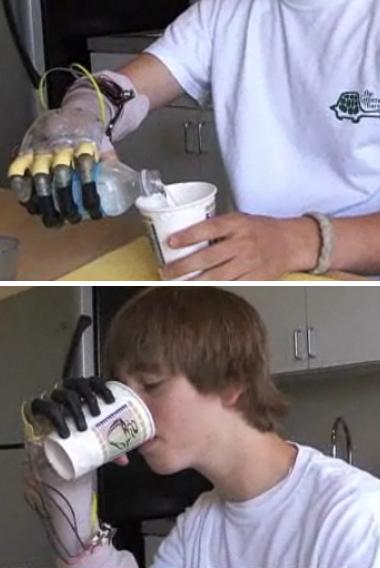 The Today Show recently ran a feature on an 18-year-old who was recently outfitted with ProDigits, the partial hand prosthesis developed by Touch Bionics. Michael Waldron was born with a congenital malformation that left him without four fingers on his right hand; through his life he has adapted to his disability, learning to perform in his high school orchestra and even play lacrosse without a fully functional right hand. But thanks to his new bionic hand, he was able to accept his diploma at graduation – and shake hands with the man who gave it to him. Tear-jerking video after the jump.

As we’ve mentioned earlier, ProDigits is a pretty exciting prosthetic – it shows off some of the leading artificial limb technology around, plus it’s already on the market. The hand can be custom tailored to each particular patient’s disability, as you’ll see in Michael’s case (his thumb fits into the device).

Myoelectric sensors along the forearm measure nerve impulses below the skin, which translates muscle flexing into finger movement. Each digit moves independently, they have pressure sensors to prevent crushing gripped objects, and the device is battery-powered.  How much does all that cost?  Roughly $70,000.

Check out the Today Show feature:

As you can see from the video, ProDigits does involve a learning curve. The prosthetic requires calibration to the individual user’s body, and it takes some practice to master. ProDigits can either be controlled via forearm muscle sensors (as seen in the video) or via remote pressure sensitive pads. Touch Bionics also markets the expensive but impressive i-Limb, one of a number of leading prosthetics that are integrated with the nervous system remotely.

Michael’s plight with social stigma is a common one, and one of the reasons that ProDigits can be outfitted with skin-like cosmetic sheaths (called LivingSkin). These “aesthetic restorations” are amazingly life-like, and frankly difficult to distinguish from a natural hand. You can even add artificial hair customized to your own, or add silicone tanning cream for the summer months. Outfitting your ProDigits with a cosmetic cover can help mitigate the unwanted attention that many amputees know too well.

At the Hub for a while we’ve been reporting on the prosthetics revolution, which has really taken off over the last few years. The competing RSPStreeper Bebionic Hand, which uses similar myoelectric sensors along the forearm, hit the market last month with a pricetag of $11,000. Some other prosthetics with more cutting-edge features are still in R&D. The Smart Hand, developed in Europe, is unique in that it sends electrical impulses back to the brain to restore the sensation of touch – but it isn’t yet available to the public.

DARPA is also involved in some cutting-edge prosthetic tech, including the Deka Luke Arm, which uses pads under the feet and shoulder sensors to control the artificial limb. Deka’s arm is not yet on the market, and will likely carry a hefty price tag (plus it’s in competition with the i-Limb, which is already available). Finally, we recently wrote up the most recent Johns Hopkins/DARPA project to actually hardwire a prosthetic directly into the brain, which is just beginning its first human trails and is probably years from marketability (and far beyond most folks’ budgets).

It’s cool to see ProDigits in action, and to get a better sense of how it impacts the lives of its users. While many of these cutting-edge prosthetics remain outside of the financial reach of many amputees (and outside of their insurance plans), they are exciting nonetheless. Time will hopefully bring pricetags down, and give these devices the opportunity to change more lives.