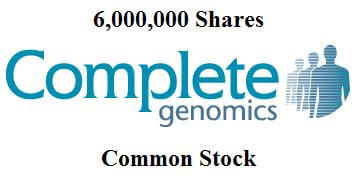 Open up your financial umbrellas, Complete Genomics is going to make it rain. The Mountain View startup has built a name for itself as one of the premier providers of whole genome sequencing for humans. Now we are just days away from their IPO. According to the filing statements with the SEC, Complete Genomics will offer 6 million shares of their stock at a price between $12 to $14. To encourage prospective investors to leap at their offer, the company released details of its current and future production. At the beginning of the year, the worldwide total number of human genomes ever sequenced was less than 300. Complete Genomics produced that many in the third quarter of 2010 alone. They hope to produce 400 genomes per month by the end of the year. These are big numbers, and they’re likely to get bigger. Much much bigger. In our interview with CEO Cliff Reid back in January, he claimed that Complete Genomics would sequence 1 million human genomes by 2014, and at prices substantially lower than any on the market today (possibly < $1000). The race to establish whole genome sequencing supremacy is underway, and this IPO will be a sign of how much faith the public has that Complete Genomics can come out on top.

It’s been a big season for genome sequencing. Ion Torrent, a company developing CMOS based DNA sequencing technology was purchased by Life Technologies for $375 million. Critical parts of the CMOS approach to DNA were actually licensed to Ion Torrent earlier in the year by DNA Electronics, a UK company looking to develop handheld genetic scanners that we’ve discussed before. Pacific Biosciences (NASDAQ: PACB), which has developed optics based DNA sequencing tech, had its IPO at the end of October and raised around $200 million. BGI, China’s premier genome institute recently announced it was teaming up with OpGen to further their own optical approach to DNA sequencing. Everywhere you look, from the EU to California to Asia, forces and finances are gathering to see who will provide the next generation of genome testing and analysis.

This heightened activity in the field may be just what Complete Genomics needs to fuel their IPO. With Ion Torrent selling for $375 M and Pacific Biosciences raising $200 M at a similar share price (~$16), Complete Genomics gets a good idea of what it can raise. The $86 million it hopes to pull in through its stock offering will nearly double what it has gained through venture investments. Complete Genomics gathered $39 million in venture funding this August putting it up to around $91 million in total. With another $86 M, Complete Genomics would have the funds to expand its new sequencing centers aggressively – a key requirement if they are to develop as quickly as Cliff Reid seems to be planning. Investors may look at Complete Genomics’s competitors recent financial gains, compare their tech to CG’s rapidly growing capabilities,and flock to the IPO.

Yet such investments are not without their concerns. Even while raising venture funds, Complete Genomics was fighting off patent infringement lawsuits from Illumina – perhaps their main rival in whole genome sequencing. Genetic testing based on SNP (single nucleotide polymorphisms) has faced growing concerns over accuracy and relevance in the light of real and perceived errors. The field of genetics, in general, has faced criticism for the lack of real world benefit for patients in the ten years after the first human genome was sequenced. Investors may see Complete Genomics’ cheap whole genome sequencing, which provides phenomenonally more data than SNP tests, as the technology that will come to dominate genetics and reconfirm its importance in medicine. Or they may see the uncertainty in genetics as a great reason to avoid investing in the field altogether.

The same factors which make investments a risk make them very exciting to techno-optimists like myself. I can’t say for certain that Complete Genomics will be the undisputed leader in whole genome sequencing. There’s too much potential competition from Illumina, and the CMOS and optical approaches developed by others are too attractive looking, to call things in Cliff Reid’s favor at the moment. Still, I do think Complete Genomics has the right approach to sequencing: specialize in one field (human genomes) and use economy of scale to push towards ever cheaper and larger production. 400 genomes a month by 2011 is an amazing accomplishment, especially as the costs for materials for each genome may be as low as $1800. The only way Complete Genomics is going to lose is if some other company can beat that. Either way, scientific research and personal genomics will have won. Cheap and fast whole genome sequencing will provide us with huge amounts of new genetic data that we can use to understand illnesses, and provide better healthcare. When your genome costs less than $1000 to sequence, millions all over the world will be encouraged to get themselves tested and claim an informed ownership of their own genetic information. Win or Fail, Complete Genomics’ IPO is another sign that the next DNA revolution is near.