Thinking of setting up your own genomics lab in the garage? Time to update your Christmas list. The Personal Genome Machine (PGM) by Ion Torrent is a DIY biologist’s fantasy: it’s fast, compact, and the first sequencer to come even close to commercial viability. Hell, it even has an iPod dock. And besides, that 90’s PCR you bought on eBay has just been gathering dust.

Ion Torrent (recently purchased by Life Technologies for a cool $375M) was started by Jonathan Rothberg, also the founder of biotech giant 454 Life Sciences. The PGM is their contribution to the growing commercial genomics marketplace, and a powerful reminder of how sequencing tech is following Moore’s Law. It will set you back $49,500 (less than a Tron Lightcycle!), which still keeps it out of reach for all but the most affluent DIYers. Still, at less than 1/10th the price of competing sequencers (compare it against PacBio’s system at $695k), don’t be surprised if it starts making headway into research labs.

The PGM is part of the second generation of sequencing technology that is racing to make genome sequencers commercially viable. The system uses semiconductors to translate chemical genetic data into digital 1’s and 0’s (rather than using light-based sequencers). What makes the semiconductor model so exciting is that it’s fully scalable; the more compact the chip, the more genetic info you can determine from a single run. The PGM was initially designed using relatively older chip tech, but as the chips get better, so will the sequencing.

Check out this Medgadget interview with a Life Technologies suit:

The specs emerged from the American Society for Human Genetics meeting recently: it can complete a run in roughly an hour, and can perform several runs per day. The so-called “314 chip” has 1.5 million wells and can pump out 10 megabases (i.e. million base-pairs) of data with every run (100,000 reads, each of 100 base pairs); each chip costs about $250. Next year Ion Torrent will release the “316 chip,” boosting these stats to 6 million wells and about 100 megabases (and doubling the price). Of course operating costs also include a server to analyze the data (about $16,500) and the normal costs of reagents and such (roughly $250 per run).

Ion Torrent has certainly designed the PGM for a particular audience: note the colorful Playstation-esque buttons and the touch-screen interface. Not only can you dock/charge your iPod/iPhone on it, you can download apps which let you monitor your experiment remotely. Even the reagents packaging makes it look like you just bought a board game (below, left). Genome sequencing made user-friendly… or at least more appealing to the gaming community. 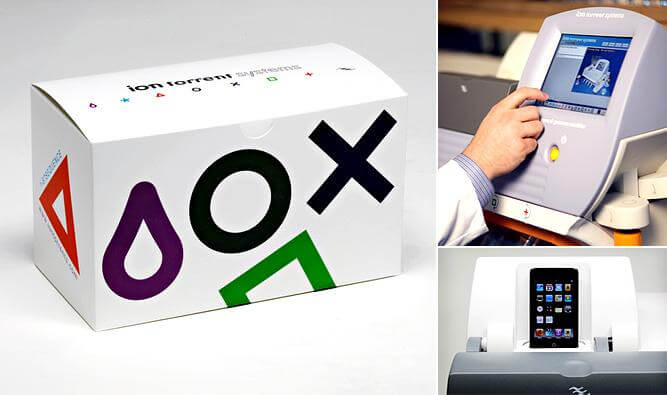 The PGM is a good example of the general thrust of these second-gen sequencers: both designed and priced to break into the commercial market. Don’t expect the PGM to take over human sequencing; as we recently discussed, Complete Genomics has a probable lock on that market. But for researchers doing in-house sequencing of anything other than whole human genomes (e.g bacteria or plants), the cost and design of the PGM should be an easy sell. As commercial sequencers show up in labs, we can expect to see a new flood of new genomic data; but as we’ve discussed previously, that doesn’t necessarily mean we’ll understand it. There is still a lot of headway to make on the analysis end of things, but cheaper, faster sequencing should give that effort of boost – and bring genomic access to a wider audience.

And for those of you holding out for more recession-friendly DIY holiday presents: we’ve got you covered.