How many of us let fear guide us? How often do abstract notions of danger keep us from living our short lives to the fullest? One woman, known to science as S.M., doesn’t have that problem. Actually, she is physically unable to render the emotion of fear. Due to an extremely rare genetic disorder called Urbach-Wiethe disease, she has lesions in the amygdalae, brain structures that help encode emotional memories and coordinate the fear response. This has led to a host of peculiar behaviors that suggest a complete absence of fear. For example, she is unafraid of natural threats in her environment and will casually approach snakes and spiders. She also has difficulty recognizing fear in others and is less averse to socially-derived risks. While this condition has led to some predicaments for S.M., she has been a scientific goldmine for researchers. By helping neuroscientists understand the complexities of amygdala function, S.M. brings us closer to grasping the underlying mechanisms of neuropsychiatric disorders. However, perhaps more remarkable than her condition is how S.M. has survived all these years without the aid of fear to keep her from harm. Despite these deficits, her brain has somewhat adapted, permitting some semblance of a normal life. 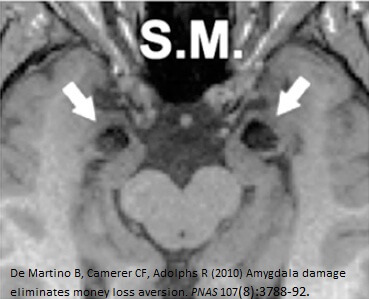 With such a significant loss of neural tissue, one might wonder if she is an invalid that requires constant restraint and 24-hour supervision. In a world full of violence and other pitiable human behaviors, how has she managed to survive? What keeps her from walking into oncoming traffic or cliff-diving without a parachute? To fully appreciate S.M.’s condition, it’s crucial that we also acknowledge her intact abilities, and there are several other alternative neuro-circuitries that may work toward S.M.’s advantage.

One is the startle response, which occurs through a neural pathway independent of the amygdala. Any robust, abrupt stimulus (i.e. loud boom, flash of light) will evoke an immediate response in S.M. This escape reflex is common in the animal kingdom, even invertebrates, and has promoted successful survival strategies for millions of years. Fortunately, S.M.’s behavioral repertoire was not spared this essential component. If a gun goes off, she’ll likely duck just like the rest of us.

Also, while she is challenged in recognizing fearful faces, she readily perceives fearful tones of voice and body positions. By recognizing fear in others, she can benefit from group vigilance, providing a line of defense from potential threats. This is supported by experiments on rhesus monkeys that showed that bilateral amygdalectomy actually enhances the fear-related behaviors in group situations. Interestingly, this response  increased with age, especially when control monkeys were present during the threats. These findings point to an alternative route for learned avoidance, one that relies on social context. Biographical details provided by her primary researchers suggest that S.M. lives in a crime-ridden but well-populated area. Maybe if she just stays with the flock, she’ll stay safe.

Perhaps her greatest asset is that she probably had functional amygdalae in her early youth. It’s now believed that the calcifications which lead to the loss of the amygdala may not begin until around 10 years of age. Actually, when she was young, she distinctly remembers feeling afraid of the dark. This could have allowed her to store the concept of fear in her cortical networks and understand what people are generally supposed to evade (i.e. hot stoves, speeding cars). Together, these alternative circuitries allow her to express some appropriate avoidance behavior without the affective state of fear. Her case highlights the adaptability and plasticity of the brain in response to a significant neural deficit. In spite of her condition, she was able to survive an abusive relationship and raise three children, one who is in their 20s.

While S.M. has been able to maintain a degree of normalcy, one of the major differences between us and her is that she probably visits neuropsychology labs as often as we go to the doctor. Relatively speaking, there are quite a few patients with damage to just one amygdala. S.M. is special because she is one of two individuals with bilateral amygdala damage frequently studied by neuroscientists (the other is named A.P.). Her condition allows them to study human emotion and cognition with the amygdala taken completely out of the picture.  Like other individuals with damage to specific brain structures, S.M. breaks the traditional research paradigm in which investigators begin with lower organisms and progress to higher life forms. With her unusual condition, she can jumpstart our understanding of the human brain in ways that rats cannot, and there have already been significant strides.

The first studies of S.M. were conducted at the University of Iowa’s Department of Psychology by Daniel Tranel and Ralph Adolphs along with Antionio and Hanna Damasio. The goal of these early experiments was to determine if S.M. could recognize fear in others. They found that S.M. performed just as well as subjects with unilateral or no amygdala damage in identifying the entire spectrum of facial expressions, except fear. Further studies were able to show her fear recognition deficit was primarily due to her inability to process information about the eyes. In fact, they discovered that when speaking to others, she ignored the eyes and focused on the mouth. What these studies reveal about amygdala function is still being worked out, but there may be implications for those with autism, who also have difficulty processing faces. If we could ever adjust amygdala function in these individuals, perhaps we could promote pro-sociality.

There are also other atypical behaviors produced by her amygdala damage. In games of chance, S.M. and her counterpart, A.P., both exhibited a lack of loss aversion. For most, losing plays a larger role in decisions than the possibility of winning, but in A.P. and S.M., this tendency is abolished. I doubt anyone will be taking gambling advice from S.M. anytime soon. Also, it appears the laws of proxemics do not apply to her, because she has a preferred interpersonal distance less than half that of a healthy human. Together, these findings suggest that she is less mindful of socially-derived risks, such as monetary loss and personal space.

Recent findings published in the journal Current Biology emphasize S.M.’s lack of fear in a variety of scenarios. Upon visiting an exotic pet store, S.M. was immediately captivated by the snakes and even ventured to touch one’s flicking tongue. She also had to be told not to play with a poisonous tarantula. Watching a series of clips from films like Seven, Silence of the Lambs, and the Shining or treading through the most “haunted” place in the world did not affect her either. To confirm that fear was absent from her daily experience, she carried around an electronic emotional diary that asked her emotional state at random times during the day. Over the course of three months, she reported feeling lonely, irritable, and happy at different instances, but not once did she report any fear. Consequently, she is immune to post-traumatic stress disorder (PTSD), which may have implications for combat veterans returning home. In fact, a study showed that veterans with amygdala damage were less disposed to developing PTSD. Hopefully, inhibiting the amygdala through non-invasive methods like rTMS or other techniques could become viable therapies for PTSD sufferers.

S.M. isn’t the only mammal on the planet that laughs in the face of fear. With a minor molecular adjustment, mice also become fearless, no amygdalectomy required. Stathmin, a cytoskeleton regulatory protein, is concentrated in the amygdala and other parts of the fear circuit. When Eric Kandel and his team knocked-out Stathmin in mice, they exhibited less fear-related behaviors. If scientists could temporally modulate the expression of Stathmin in human amygdalae, S.M.-like traits might be produced on demand.

The value of data acquired from patient S.M. is starting to rival Henry Molaison (aka H.M.), a famous patient who had his medial temporal lobes removed. His brain was so useful in delineating the role of the hippocampus in memory that it is preserved at UCSD’s Brain Observatory. S.M. is quickly becoming the H.M. of the amygdala, and there’s no doubt that she will continue to influence fear research for years to come. However, it’s disturbing to know that on several occasions she was nearly taken from us. Her closest brushes with death came not from natural threats, such as snakes and spiders, but from her fellow humans. She was the victim of near-fatal domestic abuse and was once held at knifepoint. Were it not for the darker facets of human nature, she might have avoided the physical assaults that could have ended her life. This begs the question: is there something wrong with S.M. or with our society? Clinical psychologists who examined her, without knowledge of her condition, admired her resiliency. In my opinion, S.M. might as well stand for Super (Wo)Man.