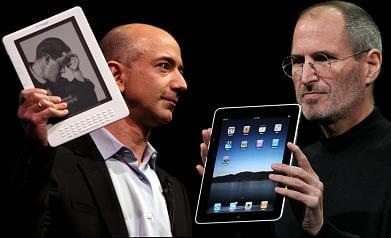 2010 could easily have been the year that the Kindle died a quiet death, buried alongside fellow victims of the Apple empire… the year that Amazon reconsidered its tablet aspirations, bowing humbly to its better, the iPad… the year Apple wiped its competitor off the map with characteristic style and ease. 2010 could have been that year.

Despite its technical inferiority to the iPad (and other high-end tablets like the Samsung Galaxy) in almost every conceivable way, the Kindle didn’t die at the hands of its competitors this year, as lots of folks thought it would (including the Hub) – far from it.

Amazon is being cagey about releasing the actual data, but suffice to say the Kindle outperformed almost every prediction for its 2010 sales (I’ve seen estimates between 6 and 8 million units, compared against its expected 5 million). In fact, Amazon just announced that over the holidays, the Kindle bumped Harry Potter and the Deathly Hollows as its top-selling item in company history.

So what’s going on? Doesn’t the cream always rise to the top? How can the Kindle continue to compete with its technically superior and Apple-sleek big brother? The most obvious answer – and undoubtedly the main reason – is a price comparison: the Kindle’s $139 entry pricetag makes it cheaper than an iPod starting at $229, (heck, even an iPod Nano at $149), much less an iPad (starting at $499). For the recession-conscious consumer still eyeing new gadgets, the Kindle is a far more accessible novelty. Still, I don’t think the price is the only relevant factor at play.

The Kindle has a whole suite of features that gives it a leg up for your consumer dollar. First up, the e-ink is far easier on your eyes than the backlit display of high-end tablets, especially for longer periods of reading (say, a book rather than a magazine article). The battery life of the Kindle is impressive to say the least, boasting a one-month charge when wi-fi is disabled. The new generation – both smaller and sleeker in design – has a sharper screen and renders photos cleanly in black and white. Wi-fi and 3G access – plus an experimental but workable web browser – mean the Kindle can fill more positions in your gadget-life than it had before.

Of course it might be unfair to compare the Kindle against the iPad; the former is specifically an e-reader, while the latter is that and so much more. Still, all the more reason that the iPad should swallow the Kindle in its shadow: it does the Kindle’s job and then some. It’s a powerful reminder that what gets touted as a breakthrough, revolutionary product (well, in Steve Jobs keynotes anyway) often can’t fully sweep the competition. I’m surely in the minority here, but I actually prefer keeping my cell phone, digital camera, reader, and internet-devices separate. Not least of all because I lose my stuff all the time.

At the very least, take the Kindle’s survival – hell, its prosperity – as proof that certain products can flourish even in the face of technologically superior competitors. Smartphones haven’t completely taken over the market, as one might expect; instead, feature phones (e.g. your entry Nokia) still dominate the market, accounting for 83% of US mobile sales in 2009. Again, price is probably the crux of the matter here, but there may also be some economic path dependence at work (a la the QWERTY keyboard).

Seeming inevitabilities don’t always pan out like we expect. When a do-it-all gadget hits the market, it might seem like a shoo-in; but can it do each task better than its more specialized competitors? At least as far as readers go, the Kindle seems to have secured its share of the market from its flashier cousin. Come February, Motorola’s entry into the fray might upset the power balance… needless to say, the tablet wars rage on. What are you reading this on?

[disclosure: I got a Kindle 3 for Christmas and I probably want to believe the hype]