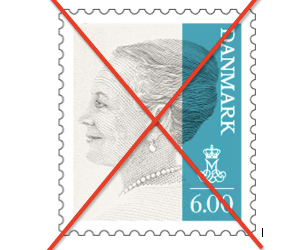 Don’t you just hate it when you can’t find any stamps?  Your birthday was two weeks ago, you still haven’t mailed those thank you notes, and you don’t have time to run to the post office – what to do?  Move to Denmark.  The Danish postal service will soon roll out a new service allowing customers to send a text message requesting a code that is written on letters in place of a stamp. The cost will be the same as a regular stamp, and will be charged to the user’s cell phone bill.  Just text “PORTO” to the specified number, write the code you receive in the response on the letter and you’re good to go.  With the rise in electronic communication, post offices around the globe are looking for ways to make the process of mailing a physical letter more convenient.  It makes sense they would take advantage of something advertisers and charities already know – people love their cell phones.

After the earthquake in Haiti in 2010, the Red Cross raised over 5 million dollars via text message donations, people are developing apps that use your cell phone to detect disease, and companies are targeting your phones as a new way to advertise. It’s about time that the postal service got in on this action.  The service is scheduled to start April 1, 2011, and can be used to mail letters within Denmark up to about 1.7 oz.  Once your letter hits the post office, the written-on code is scanned and cancelled like a regular stamp, so the risk of forgery is about the same.  The downside is that standard text messaging rates apply, so if you have a stack of letters and don’t have an unlimited texting plan, this might not be the cheapest option.  Although, the time you save might balance out the extra cost.  Neighboring Sweden thinks this is a lovely idea, and they too are working on developing a similar system.

The US is definitely lagging in the technology-improving-mail department. Switzerland already has an electronic mail option, which sends scanned images of the outside of envelopes and the rest of your mail.  You can then decide if you want them to open the envelope and scan the contents for you, or you can have the hard copy mailed; there is even an option to have them shred and recycle your unwanted mail – now that’s a time saver.  You can also sort through your mail on your iPhone because, naturally, there’s an app for that.  Australia, Germany, Italy, and Canada also have similar services that have changed the way mail is delivered.  The USPS on the other hand, is slow to embrace new technology.  The most notable update to the system was the implementation of digital stamps that can be printed from the Internet in 1996.   With the amazing advances in technology over the years, it seems ridiculous that the USPS is so old school – hopefully it will get an idea or two from abroad.  In the meantime, we here in the US are stuck trudging to the post office every time we need a stamp.  Or trudging to the office supply store because, inevitably, whenever we try to print stamps, the printer is out of toner.  So, we anxiously await some drastic improvements to the postal system, and many other services as well.

It’s simply a matter of time before we can use our phones to pay for anything, anytime.  The 12 year old running the corner lemonade stand probably has an iPhone, and could start accepting credit cards thanks to new portable credit card readers.  No need to rummage around for correct change- a new company, Square, offers a credit card reader for your iPhone, iPad, or Android, making it easier than ever to accept payments.  Just plug it in, type in the amount, and swipe away.  Cha-ching.  You can also pay for your morning Starbucks habit with your phone.  Ah, technology.

The ubiquity of cell phones make them the perfect tool for a variety of tasks, and companies continue to look for new ways to make them more than just a phone (and a camera, and a mini-computer, and all of the other things it already is).  The possibilities are endless, and app developers worldwide continue to innovate, rolling out new programs that make our obsessive use of cell phones a bit worse.  Just don’t lose it, because there’s probably not an app for that.