The End of Borders Is A Win For Technology, Authors and Readers

We’re witnessing the end of an era as Borders, the second largest brick-and-mortar chain bookstore behind Barnes & Noble, liquidates its inventory and closes all 399 of its remaining stores, costing about 10,700 employees their jobs. Opened in 1971 in Ann Arbor, MI, the growth of the Borders Group had swelled to 1,249 Borders and Waldenbooks stores in 2003 before the erosion of book sales and the digital age finally started to catch up, especially as Borders was slow to respond to the shift toward digital books. Earlier this year, Borders was brought to its knees. After declaring Chapter 11 bankruptcy in February, a buyout of the Borders empire looked promising with a $215 million bid from Direct Brands, but the deal fell through, though Books-A-Million is still interested in buying 30 stores. In the end, the most valuable part of Borders that remains is its 6.3 million square feet of real estate, and even that isn’t worth what it used to be as an increasing number of stores lie vacant across the country (apparently, these retail spaces will likely get bought up by dollar stores…a sad day indeed).

For book lovers, watching their favorite third place to browse books and attend book signings in a casual setting may make you heavy of heart. Huddled in strip malls, Borders served as beacons of knowledge amidst a sea of trendy clothing stores, themed restaurants and overpriced theaters. The loss of thousands of jobs and yet another major retailer collapsing under the weight of the recession and the major shift in consumer buying is certainly tragic.

But there’s a bright side to all of this. Put simply, this is a big WIN for technology. Furthermore, the end of Borders will do great things for authors and readers alike as the publishing world itself is forced to change its modus operandi.

The demise of Borders didn’t just happen because Americans are reading less, although there is clear evidence of that (check out the 2007 report “To Read or Not To Read” from the National Endowment of the Arts to see the direction that literacy is headed). A fundamental shift has occurred, one that many web users intuitively understand even as the various media industries have been ineffectual at responding to it: The growth of the Internet for the last two decades, the ease of entry for software developers, and the acceleration of hardware technology per Moore’s law has made digital media widely accessible and affordable, something traditional media forms are not.

It was only a little over 10 years ago when Napster, in its short-lived peer-to-peer form, changed the way in which many listeners accessed music, a development that helped the relatively new digital audio players gain traction (2001 saw the peak of Napster and the introduction of Apple’s iPod). E-books have had a much less meteoric rise, but in recent years with the introduction of the Kindle and other table e-readers, they are starting to outsell print (though no one’s sure what the closing of Borders means for their associated digital bookseller, Kobo, which offers an eReader device). And thousands of articles have been written bemoaning the impact of bittorrent sites, such as The Pirate Bay, on everything from book publishing to movies, and many sites are not even a decade old.

Collectively, these shifts in media consumption have been an unstoppable force in the marketplace that few companies have anticipated and adjusted to in order to thrive. In the battle between traditional and digital media, it’s the survival of the fittest. All in all, the trend is blatant: For better or worse, everything is going digital, perhaps not exclusively so, but there is no turning back or slowing down the transition thanks to technological advanced on multiple fronts.

So with the loss of one of the key spots for authors to promote their work and for book publishers to make sales, how in the world is the end of Borders good for writers? The main reason is that it is accelerating massive change in the publishing industry by putting authors, and not publishers, in control of creative works.

For years, books have been entirely controlled by big print publishers. They’ve decided which authors get published and what readers get to read as well as when they get to read it. Furthermore, what gets published has had to fit into specific compartments that have been defined by marketing departments. The timeliness of print has also been a problem as it’s no secret that the traditional publishing route takes years from the manuscript to stock.

But e-books change all of that as authors can now dictate just about every aspect of production and marketing on top of generating the manuscript. Publishers have been slow to recognize that the power has shifted away from them to the writers themselves. A recent blog post from editor Alan Rinzler details why now is the best time to be a self-publishing author and it’s all about the ability to create buzz. Personal blogs and social networks allow authors to connect directly to their readers, and suddenly tablets like the iPad provide writers a platform to re-imagine how to deliver their works in unique, interactive and dazzling formats (check out the recently profiled The Fantastic Flying Books of Mr. Morris Lessmore, for example). At the same time, e-books challenge authors to manage many of the tasks that traditional publishers used to handle, from editing to organizing locations for book signings (which will be harder to do without Borders), and that means taking a do-it-yourself approach or outsourcing. In other words, e-book authors must become their own little publishing house controlling their own personal content, but even still, they will do this much more efficiently than the behemoth traditional publishers. Though there are pros and cons to this new model, it all means good things for authors by putting them in the driver’s seat.

And how does the loss of brick-and-mortar book stores benefit the average reader? Digital books allow for rapid searches, cut-and-paste features for quoting and clipping, easy storage of entire libraries, rapid sharing with friends, on-the-go accessibility, much shorter release times, a much broader range of works to select from, and a collection that never ages or gets misplaced (hypothetically…just don’t lose your passwords). It’s true that many readers enjoy the physicality of books, everything from the feel and smell of the pages to the triumphant feeling of closing a book when finished. The digital era admittedly also denies readers the experience of flipping through books before purchasing (previews aren’t exactly the same) or the random find when roaming down an aisle. But for all that is being lost, readers are gaining an enormous amount in this evolution of books.

Overall, Borders will be missed, and though Barnes & Noble will undoubtedly get a bump in sales from being the sole mega chain to remain, how much longer does it have before it suffers a similar fate?

And one final note. The closure of Borders is expected to be a turning point for the better for independent book stores, and that’s good news. For those who still love being around books, there will still be places to go and be in their presence. The truth is print books aren’t going anywhere fast, but they will definitely have to learn to play second fiddle to the new digital stars while saving some paper too. 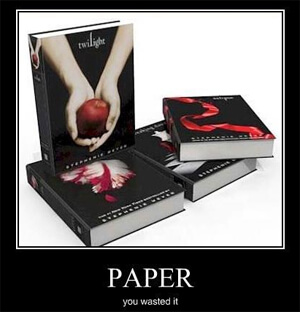