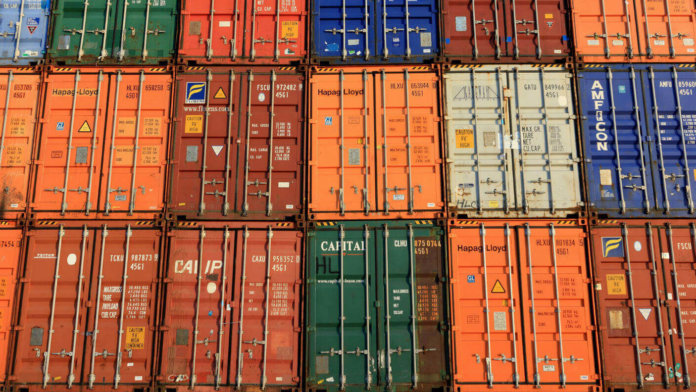 Urban agriculture has a new hope, and its name is PodPonics. Based in Atlanta, the startup is pursuing a new kind of recycling: transform old shipping containers into miniature hydroponic farms that can be used to grow food anywhere. Started by Matt Liotta in 2010, PodPonics is already supplying about 200 pounds of leafy greens a week using six converted containers. Each “pod” can produce about one acre’s worth of produce in only 320 square feet. PodPonics crops use 90% less water than traditional farms, no pesticides, less fertilizer, and go from harvest to your plate in just a matter of hours!

This is just the beginning. PodPonics has 16 new pods being built on land at the Atlanta International Airport, raised $725,000+ in private investment, and is gaining partners at all levels of their operation. From LED lighting specialists to restaurants, everyone wants a piece of PodPonics. Check out Matt Liotta interviewed on CNN in the video below.  Recently I spoke with PodPonics’ number two guy, Dan Backhaus. He painted me a picture of the company’s future, and showed me some great actual pictures (see them below). PodPonics’ version of urban agriculture wants to create local, sustainable, fresh food that also tastes better. Not bad for an old shipping container.

For those familiar with hydroponic farming techniques, PodPonics is pretty much what you’d expect. An old shipping container is retrofitted with up to five tiers of growing platforms where beds of lettuce are grown with their roots in water, not soil. Nutrients are added as needed, and banks of LED lights shine overhead. From here, PodPonics starts to innovate. They’ve added monitors for temperature, humidity, pH, and carbon dioxide levels so that these variables can be optimized for maximum growing potential. Many factors can be adjusted remotely using an iPhone interface. Their LED lights can change spectrum slightly over the course of day to stimulate different growing phases in the plants. You want the right combination of factors at the right time to produce the best lettuce. And that’s what PodPonics does for ten different leafy greens like arugula, cressida, and watercress.

PodPonics is primarily selling its produce to local restaurants at the moment, and has received rave reviews for the taste and consistency of their lettuce. Have they found a better formula for growing these greens, is eating produce just hours old simply much better for our tastebuds, or is it just hype? It’s unclear, but there’s little doubt that the Atlanta company is winning over many hearts, minds, and tongues.

Dan Backhaus was able to give more details about the startup costs of PodPonics’ production. The shipping containers they use (either 40, 48, of 53 feet long) cost between $1800 to $2800 depending on size and condition. While containers can be stacked up to 10 high, logistically it makes more sense to keep it below four for maintenance access reasons (PodPonics doesn’t stack any of their containers at the moment). This means that a 50’x10′ footprint may serve to grow ~4 acres worth of produce. That will make real estate costs feasible in most cities, though not all. PodPonics is still getting a firm idea on how much it will cost to retrofit each container once they are bought. The first pod they ever made was basically produced with materials you could find at Home Depot. Now, PodPonics is talking with companies to build partnerships for injection molded parts, more versatile (and efficient) LED lights, etc, etc. While it’s still very early to know the finalized cost of pod production, Backhaus ball-parked it near $20k. Not cheap, certainly, but well within the budgets of many cities and even non-profits looking to improve urban communities.

With their latest round of funding (again, about $725k), PodPonics is essentially making two big moves. The first is a literal relocation, moving to the Hartsfield Jackson Atlanta International Airport and constructing 16 pods. At that location PodPonics will be just two miles from the Forest Park produce terminal – the single largest distribution center for produce in the region. With 16 pods, PodPonics should be able to show that their plans are scalable and able to take advantage of any unused urban land.

The other half of PodPonics’ growth strategy is partnerships. They’ve already attached themselves to local restaurants who want their hyper-fresh lettuce, as well as bigger names in produce deliverly like Fresh Point. Backhaus says they’ve talked with lighting groups about improving LEDs, R&D partners for maximizing crop production, and various private and public agencies about how PodPonics can be spread. While the details have still yet to be worked out, it’s very possible that PodPonics will provide a franchise-like opportunity for like-minded organizations. The company trains your workers in how to build, maintain, and farm the pods, they keep you updated with the latest in computer controls and recipes for crop production, and they may even buy the lettuce you produce and sell it to partnered distributors.

Backhaus estimates that a single full time employee is needed for about every four to five pods. Such workers need to make adjustments to some control variables in the pod, plant and harvest crops, and perform regular maintenance because, as he puts it “these are farms, sh*t happens, and you need people to deal with it when it does.” So, as urban communities invest in transforming their abandoned lots into pod farms, they aren’t just adding a new food supply, they are adding a handful of jobs. Backhaus’ vision of such double-advantages to adopting PodPonics is a little optimistic, but I can see it being an appealing selling point to small and medium sized municipalities in the US. Many of those places are struggling to add any kind of jobs, but especially green jobs which often attract federal grant money (and political clout).

There is, of course, some debate about whether PodPonics truly represents a ‘green’ approach to urban farming. They use copious amounts of electricity, of course, and they use building materials that earth-based farms do not (Is the total material used more than traditional farms? It’s unclear, but probably). However, even if they’re using coal-fired electricity to power their lights, I think that’s only a temporary restraint. As LED lights become more efficient and green energy more abundant, PodPonics, and all indoor agriculture, will be less costly and likely more environmentally friendly than fertilizer guzzling and pesticide pumping industrial farms. This early in development, it’s still anyone’s guess as to which agricultural approach will be ‘greenest’ a decade from now.

That hasn’t stopped PodPonics from doing everything it can to point out how Earth-friendly they are. They use zero pesticides (not even organic ones) because their pods are essentially sealed environments. They recycle water so they only use 10% of that consumed by traditional farms. Backhaus says they plan on exploring rain water collection methods so that each pod captures all the water they need for their crops. Fertilizer is recycled as much as possible as well. And, as Liotta pointed out in the video, with pods located just a few miles from where crops are to be eaten, transportation costs are at an absolute minimum. Considering that about 90% of leafy greens in the US are grown in one spot (Salinas Valley in California), this means that PodPonics has a distinct transportation advantage for their target crop in the vast majority of the nation.

We’ve seen several efforts to bring urban agriculture into the mainstream in the last few years, but PodPonics fits into a unique niche in the concept. Some companies, like Holland’s PlantLab, are aiming for maximizing scientific understanding and crop performance and are probably years away from meaningful production. Many grass-roots urban farm projects are tied into their communities and have little interest in franchising at the moment. PodPonics, while still in its early stages, is scalable with current technology and current understanding. They’re using recycled shipping containers for goodness sakes. Those things are everywhere – 10,000 of those fall off ships every year! As PodPonics continues to innovate their pods prices are likely to come down, but there’s really no reason why local communities couldn’t use the $20k estimate and start planning their own PodPonics franchise. There are many approaches to urban farming, but the idea of PodPonics is one of the best ones that is actually ready for large scale ramp up now.

Give the company a little more time, and they may explode in size on their own. Their Atlanta airport farm will help them increase the payroll of their company from a handful to around 30 in the next year or two. They’re actively improving all levels of their production, and seeking partnerships to work on the fundamental technology. Liotta thinks they could be supplying universities for research into crop performance in the next year, and in the next five years PodPonics could be a major player in supplying lettuce in cities all across the US outside the Salinas Valley region. They are a company ready to blow.

I asked Backhaus what he ultimately thought PodPonics was leading us towards if it succeeds. While we’re unlikely to see towers of shipping containers filling our cities, he thinks many areas could incorporate pods easily. Tended by locals, fed to locals, and raising money for locals, PodPonics food could be very economically sound. More importantly, Backhaus, an avid supporter of organic and local produce, thinks food grown next door without pesticides could be a key ingredient in keeping ourselves healthy. More nutrients, no pesticides, little fertilizer. It makes for good food.

Personally, I’m pretty sure PodPonics isn’t the ultimate solution to urban food problems. But it is a great short term solution. From Atlanta to Shanghai, shipping containers retrofitted for hydroponics could serve as a great way to popularize urban agriculture with the world. This is a very feasible stepping stone to move humanity away from traditional farms and into hyper-local food production. Decades from now, I hope we’ll see the underground labyrinths or skyscraper farms that always seem to appear in science fiction. In the meantime, an old shipping container around the corner that provides the neighborhood with fresh lettuce sounds just perfect. Kudos to PodPonics for developing a great idea that the world is more than ready for.