In a twisted kind of way, this is really cool. Federal authorities discovered a drug-smuggling tunnel linking San Diego and Tijuana. Not a small-time shovel job, the tunnel measured 600 yards long, had a floor lined with wooden planks, an electric rail and cart system, a steel door controlled with hydraulics, and an elevator. The tunnel is the latest in a surge of discovered drug tunnels linking Mexico and Baja California, and a sign that drug cartels are sparing no expense and getting high tech to move their goods underground.

In May, US authorities began surveillance of what was supposed to be a produce warehouse located just a few blocks north of the US-Mexico border. They’d observed suspicious tractor-trailer activity. After watching one trailer make a drug delivery in the City of Industry, California, they obtained a search warrant. The search resulted in one of the largest marijuana busts in US history: 32 tons of pot estimated to be worth $65M. Seventeen tons were found in San Diego and 11 tons in the City of Industry. After discovering the tunnel, they popped up on the other side in Tijuana and located another 4 tons. 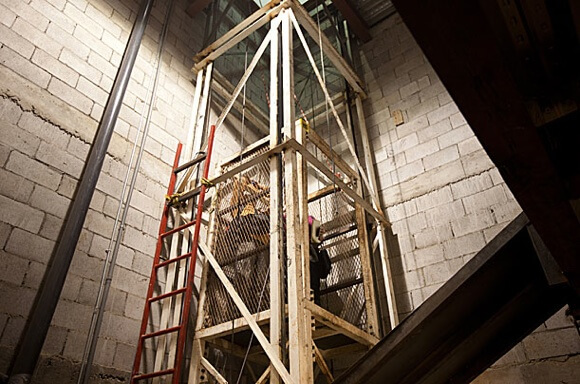 The drug tunnel is the most sophisticated of its kind uncovered to date, according to special agent Derek Benner of US Immigration and Customs Enforcement. The tunnel was accessible on the San Diego side by a wooden staircase and by a hydraulic elevator on the Tijuana side that lowered its passengers 30 feet underground. The passage includes reinforced walls and measures about four feet high by four feet wide. As if to mock Mexican authorities, the Tijuana entrance was located on the same block as a federal police office. Get a look at the tunnel in the following video.

They might not be so bold planning their next tunnel. The current tunnel is the second drug tunnel discovered in as many weeks.

Authorities think that the cartel behind the tunnel – thought to be Mexico’s Sinaloa cartel – hardly got their money’s worth. The clay-like soil of California’s Imperial Valley is soft enough to dig through with a shovel and thus prime tunneling ground. The clay is moist but dries relatively quickly. The walls of the San Diego-Tijuana tunnel were still moist, however, prompting authorities to guess that the tunnel had just gone into operation – perhaps a week at most. On November 16, a 400-yard-long tunnel was uncovered linking warehouses in Otay Mesa, San Diego and Tijuana. The tunnel was similarly sophisticated with structural supports, a ventilation system, and electricity. That sting uncovered 17 tons of marijuana. 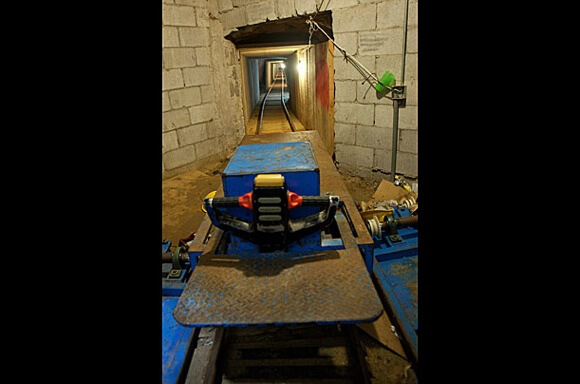 More are sure to be found. In the five years that Mexican President Felipe Calderon has been in office more than 100 tunnels have been discovered. That’s double the number of tunnels discovered during the previous 15 years. Tightened security on the surface during Calderon’s term is thought to be forcing the cartels to travel underground, and build elaborate tunnels.

As with any business, you have to move your product to the consumer efficiently. Tim Durst, an assistant special agent at Immigrations and Customs Enforcement, estimates that the tunnel would have enabled the dealers to move 25 tons of drugs in just a day or two. And, as with any businesses, there’s overhead. The drilling equipment costs between $50,000 and $75,000. But that’s not a problem for a group like the Sinaloa cartel. On the other hand, what the cartel would need is the help of experts. The sophisticated construction of the tunnels strongly suggests that specialists were involved, says Mexican army commander General Gilberto Landeros. “…not only for the size but also because it requires study of the soil to prevent it from caving in,” Reuters reported. It requires someone who has engineering experience, and knows how to use a compass and line of sight surveying.

That begs two questions: who is helping the cartels, and where are they getting the drilling equipment from in the first place?

Officials believe that cartels are buying horizontal drills that can work fast but are small enough to be hidden in a warehouse. There aren’t a whole lot of companies that make such specialized drills. But it’s hard for large-scale drill manufacturers to verify, for example, that a buyer who says he works for the Mexican government really does. Attempts to trace purchasers through vendors often leads to a dead end.

As you saw in the video, special agent Benner is feeling pretty good after the tunnel’s discovery. And certainly authorities’ eyes will now turn even more intently to the ground and what lies beneath. But I wonder if cartel kingpins are saying, “Yep, we took a hit. But you ain’t seen nuthin’ yet.”