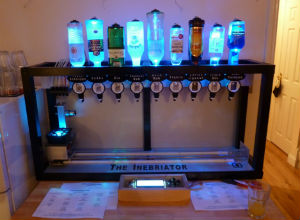 A good bartender is a different breed, possessing just the right mix of skill, personality, and professionalism. For some, bartenders become both confidant and creditor; for others, a bartender’s job is simple: produce the same high-quality drink consistently on command.

Searching the best bars for master mixologists can become a habit (or an excuse), but what about throwing a private party where cocktails are a plenty, but nobody wants to be left mixing drinks for everybody else?

That’s the motivation behind The Inebriator, an Arduino-based robot that’s programmed to make cocktails to order. Designed sometime last year by amateur engineers, a YouTube video of the robot in action was posted back in January, but remained relatively obscure until a reddit thread began a how-to discussion and widespread interest was ignited (the video now has a quarter of a million views). A recent FAQ was released on the site, where the guys made it clear that the robot wasn’t for sale and they would not be releasing schematics, parts lists, or a guide on building one yourself. However, they are improving on their prototype with a second version., so perhaps all the sudden buzz may inspire them to chronicle their work in more detail.

But the question that we can try to evaluate from the information that we do have is, who makes a better drink: a robot or a human?

Now one valuable piece of information that cannot be obtained in this duel is taste, but we can assess drink-making performance and how we’d like to be served our favorite. Compare the following two videos to decide. First up, The Inebriator making its specialty drink:

Automating a bar is not anything new, but building one in your home with cool lights for effect is a noteworthy feat and captures the flair that certain bartenders bring to their craft (although gravity-defying juggling worthy of a televised talent show is excessive, to put it mildly). An appropriate challenger would be one who with roughly the same technical ability and entertainment value of this robot, not a real bartender, but an actor being told how to perform like one.

Ladies and gentleman, our contender is Tom Cruise from the infamously bad film Cocktail:

Tom certainly looks like he is selling fun, but if it were me, I’d be wondering why it was taking so long to get my drink. The Inebriator was built mostly to be the silent type, reliably working on your next drink order.

Sorry, Cocktail fans (if there are any), but maybe this one is more than a little biased. On the coolness scale, The Inebriator beats Mr. Cruise’s performance. After all, the robot wasn’t built by a company, but a couple of guys. They didn’t use a massive computer, but the DIY-favorite Arduino board. They didn’t ask for tons of money to manufacture the Inebriator, but made it clear on their website that the robot was intended purely for their own interest and have no plans to crowdfund a thing. In other words, this robotic bartender was built for the pure geek coolness, mixing great drinks, and to liven up their parties modestly…not try to be THE life of the party in 80s glory.

For those who want to know more about what the robot can make, a recent update to the site showed it’s stocked with vodka, rum, and gin, liqueurs like amaretto, Kahlua, triple sec, and Blue Curaçao, and mixers, such as milk and seven different juices. At the moment, 15 different cocktails are programmed in, showing a clear preference for vodka drinks (White Russian, Cosmopolitan, Sea Breeze, and Sex on the Beach, to name a few) with a few rum drinks, a solitary gin drink, the Hawaiian Orange, and a secret signature cocktail, called The Inebriator, of course. If you’re interested in the technical side, they’ve also a general list of what they used.

Robotic servers are bound to become more commonplace, whether home built or professionally designed. Furthermore, more finely crafted drinks like coffee will be automated, like the robotic barista from Briggo that was recently installed at the University of Texas. An increasing number of robots are also finding their place in restaurants as well, like this Chinese robot that slices noodles.

Fans of Quantum Leap may recall a line from the series finale: “A good bartender has to be part philosopher, part psychiatrist, part psychic.” Down the road, machines will be mastering food and drink preparation skills long before the customer relations side is developed, especially the exceptional talents of a bartender that will listen to all your problems. But in time, artificial intelligence will equip robots with the personality and social prowess of the best in the service industry. Then perhaps we can have our cake and eat it too.

This is the second post in the Robot Vs. Human series. If you missed part one, you can read about a robot drummer playing a classic Ramones song here.