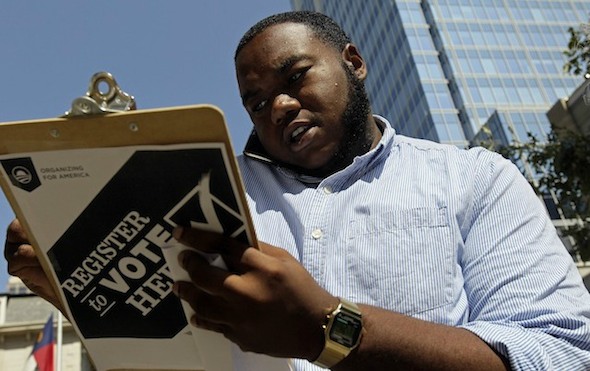 Otto von Bismarck said, “Politics is not a science, as the professors are apt to suppose. It is an art.” Truer words there never were. Even modern polling requires a healthy dose of interpretation and guesswork. But in recent elections the political art smacks of a bit more science as campaigns are pairing abundant personal data with clever algorithms, behavioral studies, and mobile technology.

Come election time campaign workers pound the pavement trying to convince tax payers the product they’re peddling is worth the cash. But there are only so many workers to go round and so many dollars to spend—so how do campaigns most efficiently employ their precious resources?

Only one small problem. A few dozen data points amount to a vast generalization—real world behavior is far more nuanced. Individuals in targeted brackets will stray for reasons not even hinted at by voter registration data.

Issenberg says the old ways started to change around 2000.

Campaigns realized voters left behind behavioral breadcrumbs in the form of consumer behavior, and those breadcrumbs were collected by private firms. (Hardly new news to the private sector, of course.) This horde of data included what kind of car you own, which catalogs you take, which magazines you read, and on and on.

Individual voter profiles have gone from a few dozen data points to thousands. But once you’ve got all that data, a new problem arises. How do you sift and analyze it? And how do you then empirically prove your analysis?

The first step is making the information useful. To do that, campaigns are running “complex statistical algorithms” to predict which way people will vote and how likely they are to cast a ballot. Whereas once campaigns operated by precinct—perhaps mobilizing a good chunk of the intended group but wasting effort on a meaningful fraction who weren’t part of the target group—now, they are able to selectively target campaigns door to door, individual to individual.

That leaves voters still on the fence (persuasion) and those committed to a candidate but not motivated to go to the polls (mobilization). For the first bucket (persuasion), campaigns can send material tailored to issues (thanks to personal data) predicted to be important to each individual.

As for the second bucket (mobilization), behavioral science increasingly informs campaign strategy. The kind of research going on now is what Issenberg calls political studies not unlike “drug trials.” One group receives one type of advertising, another receives something else, and a third nothing at all (the placebo or control).

Analyzing polls or voter turnout and linking these results back to each group allows campaigns to figure out what works and what doesn’t.

In 2006, for example, one of the most successful behavioral ploys of all time sent voters cards displaying their voting history alongside their neighbors voting history as a form of social pressure—promising to send updated cards after the election. The tactic reportedly upped voter turnout by 20%.

These days, even as behavioral studies and data analysis are being perfected, online and mobile media are being added to the repertoire.

Watch How Much Do Digital Campaigns Know About You? on PBS. See more from PBS NewsHour.

The 2012 Obama campaign developed a mobile app that marks individual voter profiles (blue flags) on a digital map. Campaign representatives need only click on each flag to find out what strategy is to be used with each individual—and for each contact they ask questions designed to further fill out the voter’s profile. The answers are added to the already burgeoning central database.

2012 campaigns are also for the first time linking already existing voter registration data and commercial data with individuals’ online behavior by purchasing access to browser cookies. And as for targeted media, nowhere is better equipped than the internet. One user might see a particular banner ad while another might see a video—depending on what the data say will be most effective for them personally.

Just how powerful these techniques will prove remains to be seen. They are a work in progress—as data is still being gathered, results tabulated, and strategies sharpened. And the more you know, the more you’re aware of all you don’t know and perhaps never can know. Issenberg says, for the folks driving campaigns into the 21st century, “empiricism breeds uncertainty.”

But as long as these practices benefit campaigns they’ll keep using them. And the better they hone their techniques the more they’ll benefit. So like it or hate it, big data and politics seem likely to form a lasting relationship.