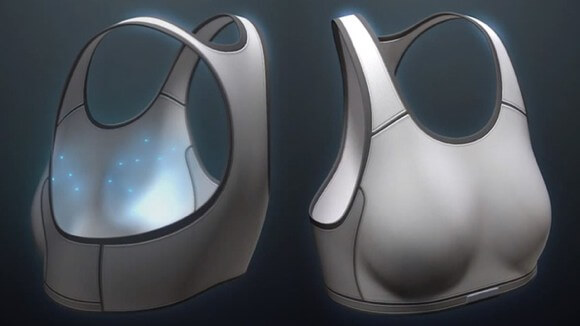 A new test could provide a way for women to detect breast cancer much earlier than is possible with mammograms or even MRI. And the best part is, it’s as easy as wearing a sports bra.

The high-tech undergarment, First Warning System, is based on chronobiology, the scientific study of how the body is affected by time. The device specifically tracks changes in temperature, searching for aberrant spikes that could be a tumor. When tumors form, they recruit blood vessels to supply them with the increasing blood flow they need to feed their multiplying number of cells. This extra growth generates more heat than surrounding tissue containing normal amounts of blood vessels.

First Warning System is initially worn for a time to establish a baseline temperature for the breast, to track normal fluctuations caused by changing hormone levels, physical activity and ambient temperature. Any areas that then show an increase above baseline become candidates for tissue abnormalities. Further tests, such as a biopsy, can then confirm whether or not the a tumor is present. The data is then uploaded to the Internet where it is analyzed with software that the user can look at themselves.

Normally a tumor must grow to about 1 cm in diameter – about the size of a pea – before it can be manually detected. That can take years, giving the tumor a dangerous head start. According to Lifetime Biotechnologies that make the device, First Warning can detect a tumor six years “before the other methods would even pick up on a lump.”

Here’s a short video interview showing how the system works.

Three clinical trials have shown the device to be 90 percent accurate in predicting tissue abnormalities and reducing false positives, according to Lifeline Biotechnologies. A 2009 study involving 90 individuals showed First Warning System to be 94.8 percent accurate in identifying four separate breast conditions: normal, benign, cancer and suspected cancer. That’s a lot better than conventional methods. The golden standard for breast cancer detection, mammography, identifies only about 80 percent of breast cancers and is less able to detect tumors in younger women with denser breasts as well as women who have previously had surgery. Also, nearly half the time mammograms are incapable of distinguishing between malignant and benign tumors. Lastly, regular mammograms – recommended screening is every one to two years – involves repeated exposure to X-rays.

Happily, an earlier trial has already shown that the system saves lives.

Nineteen years ago, back when First Warning was just an experimental device, a trial was performed at Greene Memorial Hospital in Ohio. Nedra Lindsay, then a 24-year old nurse from Ohio, had taken her friend’s place in a trial to test First Warning. The system detected a tissue abnormality and a subsequent biopsy confirmed that Lindsay had a very aggressive form of cancer. The cancer was treated and Lindsay is alive today to tell the tale. “Here is a young lady that would have waited years and years for testing while a tumor kept growing, and manifesting the potential to spread and might have been incurable,” commented Ron Fletcher, who led a study conducted for First Warning System.

While not quite as costly as the bejeweled um, some masterpieces worn by Victoria’s Secrets models, the First Warning bras won’t be cheap. When they’re made available in Europe in 2013 and in the US in 2014, they’re expected to cost around $1,000 each.

The continual body monitoring of body 2.0 is poised to revolutionize medicine. In the future we’ll no longer make appointments for a checkup. Instead our bodies will send data to our doctors continuously and alert us of any cause for concern. Now, it seems that breast cancer is soon to receive that continual monitoring so vitally needed. The incidence of breast cancer among women in the US has increased from one in twenty back in 1960 to one in eight today according to the American Cancer Society. Second only to non-melanoma skin cancer, 210,203 women in the US were diagnosed with breast cancer and 40,589 women died from breast cancer in 2008. But 96 percent of those diagnosed early survive for at least another five years. So while there’s still no cure for breast cancer, an easy to use, early detection device could make the difference between life and death for so many women.