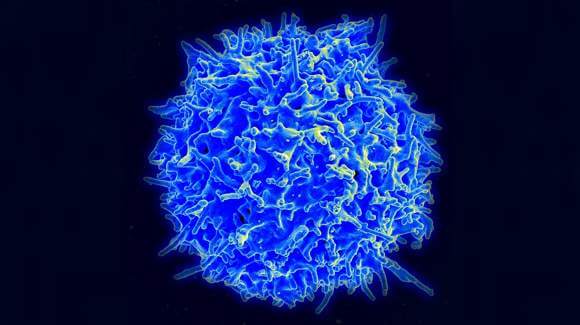 T cells have the natural ability to target and destroy cancer cells and scientists have long since sought a way to recruit these innate defenders to rid the body of tumors. Weakening their ability to become an effective treatment, however, is the T cells’ short life spans. But researchers at the RIKEN Research Center for Allergy and Immunology in Yokohama, Japan have devised a way to increase the number of cancer-fighting T cells and make up for their short life spans with the hope that the superior numbers of immune cells will enable them to overwhelm and conquer.

The treatment centered around immune cells known as cytoxic T cells – also known as killer T cells – that recognize proteins on the surface of cells that signal that they are infected or cancerous. In the current study the researchers worked with T cells that attack a specific kind of melanoma. In an elegant display of bioengineering, they first converted the T cells into stem cells, grew the stem cells to large numbers, and then converted them back to T cells. The new T cells were still able to recognize and attack melanoma cells, due in part to their continued ability to produce the anti-tumor substance interferon-gamma.

To transform the T cells into stem cells, the team treated them with the ‘Yamanaka factors,’ the four genes that UCSF researcher Shinya Yamanaka had found induced pluripotency in skin cells. Dr. Yamanaka was awarded the Nobel Prize in Physiology or Medicine last year for his discovery.

Still in the early stages of research, the scientists have only demonstrated that they can multiply the amount of immune cells but have yet to see if they are safe or effective for treating HIV or cancer in human patients.

“The next step will be to test whether these T cells can selectively kill tumor cells but not other cells in the body,” lead researcher, Hiroshi Kawamoto, said in a press release. “If they do, these cells might be directly injected to patients for therapy. This could be realized in the not-too-distant future.”

Normally when we hear about induced pluripotency scientists are turning one cell type into another – skin cells into heart or brain cells, for example – in an effort to replace tissue lost or damaged due to disease. The current study’s new strategy could be used to treat other diseases that T cells normally target but are outnumbered. The bolstered T cells could potentially be used to tip the balance in people infected with HIV, for instance. An advantage with the stem cell approach would be to use the patients own T cells to decrease the risk of rejection by the immune system. The researchers behind the current study seek a new tactic from stem cell pluripotency: instead of making one thing from another, they seek to take a good thing and simply make more of it.