Scientists Work To Unravel Mystery Behind Woman Who Doesn’t Grow 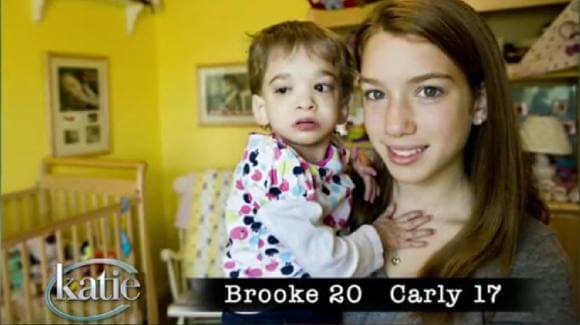 Twenty year old Brooke Greenberg hasn’t grown since age five. For the last 15 years mystified doctors have been unable to explain the cause for Brooke’s disorder that has kept her aging in check. At age twenty, she maintains the physical and mental appearance of a toddler.

Eric Shadt wants to solve this most bizarre of medical mysteries. Director of the Icahn Institute for Genomics and Multiscale Biology at the Mount Sinai Medical Center in New York, Shadt is leading research to uncover the genetic cause for Brooke’s condition.

Because hormones control many of the maturation processes, one of the first things the research team looked at was to see if Brooke’s own hormone levels might be abnormal. In a piece he wrote on Katie Couric’s website on whose show he and the Greenberg family recently appeared, Shadt explained that Brooke “has no apparent abnormalities in her endocrine system, no gross chromosomal abnormalities, or any of the other disruptions known to occur in humans that can cause developmental issues.”

The researchers are now are painstakingly analyzing Brooke’s entire genome in search of unique mutations. Needless to say, it is a formidable undertaking. “Cracking the code on Brooke’s condition,” Shadt wrote, “is the proverbial searching for a needle in a haystack, since likely there is one or a small number of letters changed in Brooke’s genome that has caused her condition.”

To find the mutation Shadt and his team are using the latest genome sequencing and analysis tools. The strategy is to compare Brooke’s genome to the genomes of her parents and three normal sisters, as well as to other available sequences from the general population, and identify gene mutations that only Brooke has.

Already the research team has found some unique mutations. To test the function of these the genes they’ve taken cells from Brooke’s skin, converted them to stem cells, then converted the stem cells to neurons, liver cells, fat cells and other types of cells. Because they are her own the cells provide a powerful tool with which to determine how the genes affect Brooke’s biology. Unfortunately any gained insights would not be able to treat her condition, but it is hoped that identifying the genetic abnormalities could lead to new treatments for other diseases. In addition to possibly learning about the aging process and the secrets to longevity, Shadt thinks the anti-aging effects of the genes could be used to develop gene therapies or drugs to treat Alzheimer’s, heart disease or cancer.

In addition to the cellular studies, Shadt mentioned on the Katie Couric show that they’re beginning studies to determine how the mutated genes affect the health of fruit flies. It’s possible that signs of arrested aging Brooke is experiencing will be seen in these organisms. Not only would that allow them to identify the ‘needles in the haystack’ but also to study how they work.

As far as Shadt knows Brooke is the only person in world with this condition. Its singular rareness means it doesn’t even have an official name. Doctors have taken to calling it Syndrome X.

Brooke’s early life was complicated with a number of medical emergencies. Before reaching six she had undergone several surgeries for seven perforated stomach ulcers. She had also suffered a brain seizure which had caused a stroke, but the stroke had no lasting effects. At four years of age she fell into a coma for 14 days. The doctors identified a brain tumor, but by the time she’d woken up the tumor had disappeared. There’s a sense that, despite her arrested maturation, she has an uncanny ability to overcome other medical complications. It’s hoped that this is real and not just a coincidence, and is in fact more evidence that elucidating the genetics underlying her disease may help others overcome their diseases as well.