Recording Your Life, Allowing Others To View It As Virtual Reality World: Lifelogging 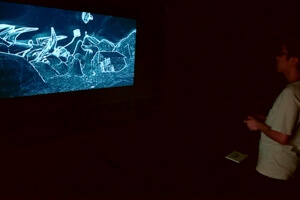 It’s called Bad Trip, and it certainly feels like one.

Alan Kwan has been recording every moment of his life since November 2011 and he faces the same problem that other lifeloggers do: what to do with all that video footage? Needing a way to organize the rapidly accumulating footage and to provide a way for he and others to easily navigate the data, Kwan has made a game of it. “Bad Trip” is an immersive virtual reality experience that people can navigate with a game controller. It’s along the lines of VR worlds like Second Life, except in Bad Trip the houses contain clips from Kwan’s life. By exploring a collection of clip-containing cubes, the first-person avatar can “navigate the creator’s visual mind.”

At least the small portion that Kwan chose to reveal in the video below – only 5 percent of the entire world – is a bizarre, nightmarish one. Not sure if the ghoulish landscape across which the wind eerily howls and across which a breathless runner (you) seems to be running from something is Kwan’s allusion to the dark caverns of his own mind, but it certainly looks cool – even the zombie-like guys with trees as heads. But a trip into one of the houses brings us back to a cafe where we relive Kwan’s time with a young lady. Nothing dark about that – so far.

Kwan uploads videos to Bad Trip everyday. But it isn’t simply a repository, he’s actually designed some gaming elements into it. For instance, the house that stores his childhood memories is located at the top of a hill. To reach it, one must climb a winding staircase. He says it usually takes people a few tries before they reach the treasure trove that is his formative years. And his “secret” memories – well, like the rest of us, he allows others to only get so close. These memories are stored in flying houses that are impossible to reach. But, if you’re determined, you can climb a mountain and, standing atop, hear the sounds of Kwan’s secrets as they go flying overhead. Better hope Bad Trip isn’t as easy to hack into as some early first-person shooters.

In my opinion, a virtual world is a great format for storing and organizing lifelogs. Probably other visions of memory-laden worlds will be developed by Kwan and others in the future, especially as the number of lifeloggers continues to grow and the need for a user-friendly interface grows with it. So at least we can count on the aesthetics of our memory worlds to be interesting, even if the content isn’t.

Bad Trip: Navigate My Mind from KwanAlan on Vimeo.