A swarm of helicopter drones are being deployed to British soldiers in Afghanistan thanks to the UK’s Ministry of Defence. Dubbed the PD-100 “Black Hornet” Personal Reconnaissance System, the Norwegian-developed drones are finding utility and praise among the Brigade Reconnaissance Force, according to the Associated Press.

Altogether, 160 of the Prox Dynamics drones have been ordered as part of a $31 million contract, with the first drones being deployed some time last year. 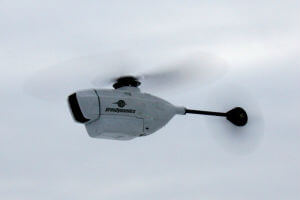 Measuring 4-inches long (roughly the size of a toy diecast helicopter) and weighing half an ounce, each tiny helicopter is equipped with a steerable electrooptical camera that relays images and video to a remote terminal. The battery-powered drones have enough power to run for close to half an hour, stay airborne in windy conditions and can reach top speeds of 22 MPH.

The drones can be piloted remotely using a base station or can follow paths programmed via GPS.

On the company’s website, a number of potential missions are proposed for the little choppers, both military and civilian uses, including  search and rescue, object identification, crowd control, inspect nuclear facilities, and as probes in chemical plants in which an accident has occurred. Additionally, Prox states that the nanocopter UAVs can be up and ready to use in a minute, are inaudible, and require little training to operate. Research on the drones took place for four years before they were put into service.

Reportedly, the Black Hornets are being used by the British military to identify “insurgent firing points and check out exposed areas of the ground before crossing.”

Compared to the nano quadrotors that tallied up millions of views on YouTube last year, it’s interesting to note that the Black Hornet is a miniaturized version of its larger helicopter counterpart, rather than employing multirotors. This makes sense considering it basically a camera with propellers and so the design reflects the necessity to easily point the chopper’s nose in the correct point of view for the camera.

The US and other nations continue to ramp up the number of drones that are being used in the field. While the price tag for these little guys is jawdropping (breaks down to close to a couple hundred thousand dollars for each), the advantages of their size are clear. A flying camera that can be maneuvered through the air quickly and easily without being detected is a dream come true. Many of the other drones that are approximately this size are often used for swarm functionality to create communications networks, for instance.

There’s little doubt that drones will continued to be miniaturized and loaded with more sensors, longer lifetimes, and better flight capabilities.