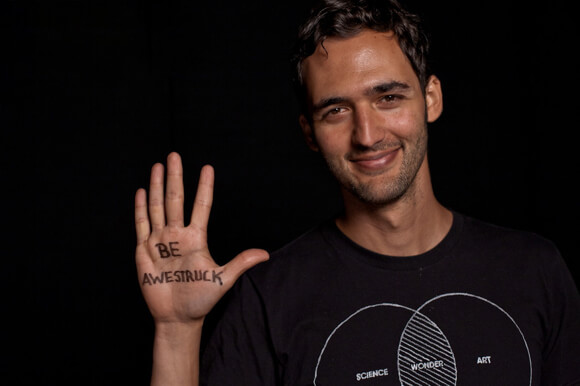 Filmmaker Jason Silva’s latest short film, “The Mirroring Mind,” is a stream of consciousness about consciousness itself. Like the ultimate Zen koan, wherein the brain contemplates the brain contemplating the brain, Silva says self-awareness is “plugging a video camera into the TV and then aiming the camera at the TV—the recursive loop that is formed extends itself ad infinitum.”

Silva’s philosophical salvo is well timed. The question of the brain has been, of late, rising out of the collective unconscious. Can we reverse engineer the brain? Can we give birth to consciousness and self-awareness in binary? Do we even know what consciousness is, and will we know it when we see it?

The European Commission recently awarded the Human Brain Project €1 billion for research over the next decade. The Obama administration is reportedly eyeing $3 billion to map the brain in the US. Ray Kurzweil and Google want to fine tune artificial intelligence, and maybe attempt to reverse engineer the mind.

Meanwhile, prominent neuroscientist, Miguel Nicolelis, says the brain is not computable now, and it never will be. He thinks consciousness is an unpredictable, emergent property of billions of complex non-linear processes—like the economy—that can’t be induced in a collection of silicon chips. (He may be right, but liberally using words like “never” is like asking history to dinner for a bite of crow.)

Who’s right? See below for Singularity Hub’s latest interview with Silva, the man of many monikers. (And check him out as host of the show, Brain Games, on National Geographic Channel this April!) But first, watch him spend a mad two minutes waxing poetic on the nature of self-awareness. If you aren’t inspired to pick up a thoroughly foxed copy of Hofstadter and go running off on a quest for unpixellated Buddha-consciousness—watch it again.

Do you write scripts for your videos or do you improvise—or is it an amalgam of those two things?

Honestly, it’s an amalgamation that starts with an idea of what I want to riff about. Like when a rapper is freestyling, he might know that today he wants to freestyle on the subject of brains, or today he wants to freestyle on the subject of his ex-girlfriend. So, I often have an idea of the overall theme and one or two quotes that I want to connect, maybe from an article or a book chapter. Sometimes a sentence is so amazing I just want to say it out loud and trigger a butterfly effect in thought, a butterfly effect in association that will spiral out of that sentence—and that’s what usually turns into a riff.

What inspired this particular video? Was it that Hofstadter quote at the beginning?

I came across this idea about the vortex of self-mirroring when I picked up Hofstadter’s 1979 book Gödel, Escher, and Bach: An Eternal Golden Braid over a year ago. I was in a bookstore wandering around, found the book, started flipping through it and stumbled on a passage where he explained the self-mirroring. I later remembered it, looked it up, pasted it into a Google doc—and forgot about it. This was over a year ago, before I’d done any of my videos. Then a couple weeks back, I was in the head space of, “I need a new idea to make a riff about.” I was with my friend in Central Park, and the Hofstadter idea just occurred to me. I remembered the explanation verbatim almost—even though I hadn’t looked at it in over a year—and it just spilled out as live and spontaneous as it is in the video in the park, with zero planning.

So the idea went straight from “I know what I want to talk about” to “let’s film it?”

Yes! I carry my camera in my pocket when I go on these little adventures out to the park and nature—it’s that whole idea that if you go to a place with vast open spaces it opens you up internally too. I guess you could say the only thing that did exist was the intention to become inspired in some way. That’s the only element of pre-cog. I was with a certain kind of friend; it was the kind of person I normally have a good time with; we went to the park; we got in the zone—and then all of a sudden I was like, oh my god, I know what it is. And then I just started talking.

Speaking of the inspiration for these videos coming from books and articles, you must have a pretty serious reading schedule.

I read in a very natural way, incorporated into the baseline unfolding of routine everyday. I’ll wake up and check Twitter and the people I follow. Then I always have a few books near my bed, near the bathroom that I have half open, half marked. I’m not really reading one book in order as much as reading different things and looking to make associations and connections. Steve Jobs said, “Creativity is just connecting things.” I’m hoping everything I read will make me go ah, ha! another clue. I want these little fragmented ideas and connections to be percolating in the back of my head, so that in that moment when I’m not thinking about it and when I’m walking around the park, all of a sudden all those things I’ve been reading will coalesce and feed the pattern.

Do you have a working definition of consciousness?

I should preface by saying I’m an artist and not a brain scientist. But I think consciousness is an emergent phenomenon. I think it is rooted in physical matter, but I think it has a transcendent quality because it emerges. If you have a certain amount of complexity on the lower levels, the sum is not just greater than its parts, it’s fundamentally different. Like on different scales, reality operates differently. And so consciousness emerges from the complex interaction of the neurons in the neocortex.

But the brain can’t exist in a vacuum, and therefore consciousness cannot exist in a vacuum. The environment informs the way we think. Part of our thinking is done maybe on paper. Part of our thinking is distributed among our computers and the people we talk to and the feedback we get from them. Consciousness emerges from the brain in a very physical way through this self-mirroring of the external environment that Hofstadter talks about. The cognitive philosopher Andy Clark says that although consciousness emerges in the brain, consciousness is sustained by the feedback loops between brains, tools, and environment. In other words, self-awareness  emerges from constant feedback between the brain and the environment.

At some point, maybe we’ll be able to create consciousness in a machine—how will we know in your opinion?

Number two, you’re talking about when a machine passes the Turing Test, and it tells us that it’s conscious—how will we believe it? Well, I think Ray Kurzweil’s answer is best. He says, at some point the AI’s answers will be so perfect, so nuanced, its interactions with us and its adaptation to us will be so smooth and indistinguishable from talking to a real person, that we’ll just have to take that leap of faith. And Kurzweil says we do that every day with each other. Like I have to take a leap of faith you are a person, and that I’m not in some virtual Matrix-like environment talking to Mr. Smith right now. You could be a very convincing digital robot that’s programmed by the Matrix to feed this into my lucid dream right now. But at some point I just have to take that leap of faith—I think it’ll be the same thing.

Consciousness is basically unprovable, but in the end, that doesn’t really matter.

You’ve heard about the billion euros the European Commission will give the Human Brain Project, and the Obama administration wants to spend $3 billion to map the brain in the US. Care to speculate on the success of such endeavors?

I’m very excited because I think this could be like the Apollo project for modeling the brain. We needed that excitement and that momentum to get the hearts and minds to make this happen. Like when Kennedy said, “We’re going to the Moon.” That Europe is doing a CERN-style project on the brain and now Obama wants to do it too—provided it doesn’t get derailed by stifling bureaucracies—I think it’s very possible there could be a breakthrough. At the very least, we’ll get really comfortable with all the operations and signals that get processed within the brain.

It’ll be the ultimate manifestation of us turning ourselves inside out. It’ll be the universe folding in on itself completely. Once the brain understands the brain 100%—who knows what happens! Like what Erik Davis calls the “mystic-psychotic collapse” where baseline reality dissolves. That’s why I ended my video with that line. I think it’ll be the ultimate surprise and delight and astonishment.

Where to from here? What’s your next project?

I’ve been spending the last couple months working on a new TV series that I’m hosting called Brain Games for the National Geographic Channel. We finished it already, and it comes out in April. So that’s been keeping me a little bit busy. But I’m working on creating the space and time to go on one of my open mind sessions and come up with the next idea. People seem to like that this video talks about the theory of consciousness and science and then connected it illumination and enlightenment and Buddhism. It would interesting to do another video that links something scientific, something literal, to something people might call poetic or spiritual. Although, I think technology is poetic enough. Our iPhones and skyscrapers and jet engines are the ultimate manifestation of all our wisdom. It’s all in the presentation. People are hungry for meaning. By looping that connection at the end, it leaves people feeling invigorated and happy to be alive.