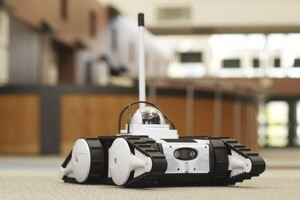 Over the past six years RoboteX has developed a lineup of sturdy robots versatile enough to be used by the military, police, or people who think they might have heard something in the shed. Their Avatar series Security Robot goes on patrol so humans don’t have to. Realtime video is fed to a control center wirelessly for monitoring, and a two-way audio feed allows controllers to ask questions first and get answers hundreds of miles away. Its camera has full 360 degree coverage and shoots in both visual and infrared – so there’s no hiding in the dark. It’s also hard to get away from – capable of climbing stairs and moving over carpets, wet floors, even rugged outdoor terrain, it can go just about anywhere a human can (apart from climbing – but maybe future models will be given the super-jumping power of Boston Dynamics’ Sand Flea). Avatar can be programmed to follow patrol routes and respond to alarms, or be manually controlled to inspect incidents. It also weighs just 25 pounds so it can be carried and deployed easily.

In addition to patrolling and heavy duty reconnaissance such as serving as a go-between in a hostage situation and investigating suspicious packages, RoboteX also provides a line of robots for home use. Compatible with any iOS device, the robots can be remote controlled to inspect a house and its surroundings. Its two-way communication also comes in handy at the office or in those moments when you just don’t feel like climbing the stairs to tell you kid sister it’s time for dinner.

The appeal of security robots is not only that they won’t get caught sleeping on the job, but that, over time, they pay for themselves. At least that’s the selling point of companies like RoboteX where they guarantee “cents-on-the-dollar” savings compared to conventional security guards. Other robot security guards, like Vigilus from Vigilant Robots, promise that companies can save money by replacing their flesh-and-blood guards with nuts-and-bolts ones. Of the many markets robots are trying their best to break into, security could be one that pays off sooner rather than later.