Are we witnessing the birth pangs of a new decentralized global currency? Or is Bitcoin merely an age-old investment mania repackaged for the digital age?

Recent headlines are humming over the booming digital currency Bitcoin—it’s either the next big thing or the digital equivalent of Tulipomania. Either way, there’s no debating the fact Bitcoin’s on a wild ride.

Bitcoin dates back to 2009, but it was the 2011 Bitcoin bubble that brought the cryptocurrency mainstream. The USD/Bitcoin exchange rate jumped from $1 to $30 (+2900%) and plunged back to $2 (-93%) in a matter of months. Press coverage was equally bubblicious, a rash of articles praising then panning it. Bitcoin followed a more orderly path to a market price between $5 and $10 in 2012. Then in early 2013, the madness began again.

Since January, the market’s been on a rocket ride. Due perhaps to cycling euro worries, most recently regarding frozen Cypriot bank accounts, Bitcoin is brushing the giddy heights of $235 on the biggest Bitcoin exchange, Mt. Gox. If the richest Bitcoin baron (according to this 2012 Forbes article) cashed in their computerized currency for dollars, they’d rake in $103 million. (As this article was drafted, that number shot up $30 million!)

What exactly are Bitcoins? The cryptocurrency is comprised of digitally created and traded financial units. Users can install Bitcoin mining software—thus dedicating a set quantity of processing power to the creation of Bitcoins—or they can buy units with major currencies. The Bitcoin money supply is set to expand at a consistent rate, constrained by processing power, until the year 2040, when it will reach a pre-determined limit of 21 million Bitcoins. (For the finer points, check out our previous coverage here.)

A little perspective is key. Despite the outsized media coverage, the Bitcoin market is miniscule compared to most major currencies. The market for USD alone is worth trillions. Bitcoin, even after the recent boom, is but $2 billion—and just a few months ago, the market was less than a tenth of that.

Bitcoin’s diminutive size contributes directly to its massive volatility, which is problematic for a medium of exchange. If folks don’t know how much bread or beer their cash will buy tomorrow, they’ll dump the currency for something more stable. Volatility’s done away with a number of major currencies in the modern era—hyperinflation in the post-World War I Weimar Republic or more recently in Zimbabwe, for example. 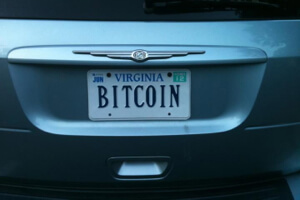 In the case of Bitcoin, the volatility is currently in the upward direction—the currency is getting stronger. But it’s shown itself equally capable of moving  the opposite way. Those extreme swings make Bitcoin more of a speculative investment than a useful medium of exchange for now. (Bitcoin’s recent behavior is characteristic of a classic investment bubble—with some people rationalizing an irrational market and others cashing out for Porsches.)

As for whether Bitcoin will one day become a full-fledged currency, there’s no particular reason it couldn’t. What makes a currency a currency is that those trading it have confidence in its value as a medium of exchange and therefore continue using it. Humans have used cows, shells, even pieces of paper as money.

But building confidence is itself a complicated algorithm, and the crowd a fickle thing. Money is an already arcane subject, and a decentralized, digital currency may find enduring confidence elusive—proving itself particularly prone to cycling panics, as the crowd becomes suddenly, terribly aware of just how esoteric, unfathomable, and wild the system has become.

Will the cryptocurrency survive these Bitcoin booms and busts? Maybe, maybe not. The volatility may diminish as the market grows in size and liquidity. But maybe Bitcoin’s greatest value is its use as a case study for future currencies that rely less on the all too human judgment of central banking’s philosopher kings.

Regardless, if recent history is a guide, it’ll be an entertaining outing as Bitcoin gives birth to fortunes and failures, buys homes and cars, gets hacked, manipulated, regulated—and generally evolves at a frenzied pace worthy of the digital age.