Meet The Two-Ton Robotic Mantis: A Hexapod You Can Ride In 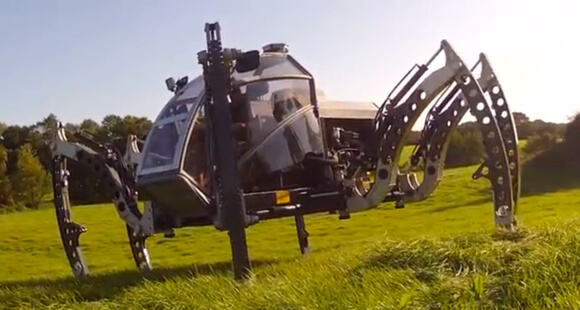 Weighing in at a little over two tons, Mantis is likely the biggest robot hexapod you’ve ever seen. Mantis walks on six ground-sensing hydraulic legs, carrying a human in its thoracic cockpit. It can manipulate objects, like pushing a trailer, and fold itself into a truck bed. In footage taken without the full cockpit, the Mantis/pilot hybrid has the look of Spider-Man’s Doc Ock. Mantis is, quite simply, a sweet looking robot.

But…why Mantis? Chief Designer and hexapod addict, Matt Denton, says, “I always had this idea of building a larger machine; (a) because it’s cool to drive a six-legged robot and (b) for R&D purposes.”

Please refer to clause (a) before criticizing Mantis’ as yet deliberate pace on uneven ground. (And consider the engineering it’s taken to scale this robot and get it to walk.) As for clause (b), a quick glance at Denton’s YouTube site is enough to convince he’s been conducting some pretty serious hexapod R&D for years.

Hexapods are one solution for sending robots wherever humans can go, but don’t necessarily want to. Denton thinks Mantis’ broader application is carrying humans or other heavy loads over rough terrain. Emergency or military personnel may in the future use robots like Mantis to navigate variable terrain as human surrogates in dangerous situations—a hazardous materials leak or mine and bomb disposal.

Boston Dynamics is well known for working on similarly purposed robots. BigDog and LS3, for example, or RHex which, like Mantis, is a (much smaller) hexapod.

While Mantis’ size is impressive, there’s an even cooler, potentially more revolutionary hexapod on Denton’s site—the Hexapod Robot CNC Router. See below as Denton’s CNC hexapod moves into place over a sheet of high density foam and proceeds to carve a human face out of the material.

Outfit a hexapod robot like this with a welder, 3D printing nozzle, router—or all of the above—and send one or more skittering off on programmed or autonomous fabrication and repair missions. Heck, add magnetic feet and these things could work on bridges, skyscraper supports, even space stations.

And of course, this wouldn’t be Singularity Hub without one more suggestion. Denton’s taken hexapods big, but how about taking them small? Might we someday see these awesome robots on the nanoscale? But of course.