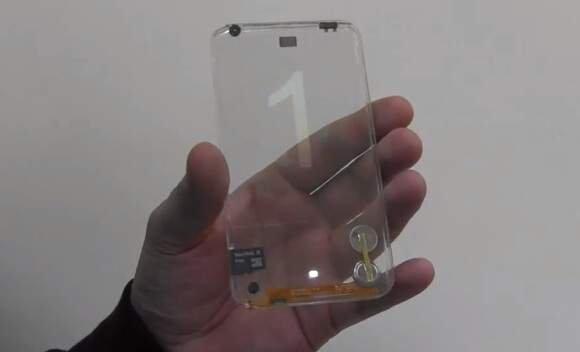 Although Polytron aims to complete their smartphone by the end of 2013, and at least one breathless blogger thinks it’ll compete with Apple’s iPhone, judging by the prototype Polytron has more work ahead of them. But the phone’s transparency, its central appeal, is a problem they’ve already solved. The firm’s flagship product, Polyvision Privacy Glass, is an electrically switchable, selectively opaque or transparent pane of glass. Check it out in action below. (Dig the music!)

How does it work? Each Polyvision Privacy pane is a sandwich of glass, conductive material, and liquid crystal film. In its natural state, the central crystalline structure is randomly oriented, scattering incoming light to make the surface opaque. But when an electric current is introduced, the liquid crystals line up and become transparent, transmitting light from one side to the other.

Generally, it’s cool to see transparent smartphones take shape. But the technology behind them isn’t new. Samsung, for example, has been experimenting with transparent displays for a couple years. See here for the latest iteration of Samsung’s transparent tech coupled with touch:

It’s easy to see how the futuristic, aesthetic appeal of a see-through smartphone might sell well. But including the small benefits (like walk-texting without tripping) and costs (like background distractions), the added utility of transparent smartphones seems minor—particularly in light of Google Glass and wearable computing. That said, transparent screens could well show up in computer-enabled glasses as an alternative to projection screens like Google Glass.

Overall, as potentially cool as a transparent smartphone is, it’s the bigger theme that I like. Technology is softening the division between digital and physical, software and hardware. It’s this idea we can enliven dead materials like windows or tables or living room walls by impregnating them with conductive materials and CPUs and WiFi.

Some of the coolest examples of this are happening in the art world. Consider Leo Villareal’s LED Bay Lights installation on the San Francisco span of the San Francisco-Oakland Bay Bridge. Bay Lights is a 1.8 mile long, 500 foot high, never repeating visual delight—25,000 LEDs affixed to the bridge’s vertical cables are driven by computer algorithms and $30 in energy a day.

Or check out Nervous Structure from Cristobal Mendoza below. 147 elastic strands are illuminated by a projector. The digital projection responds to the physical gestures and movements of the exhibit’s admirers, while the physical strands remain motionless. Mendoza’s work sends patrons right through the digital looking glass to pluck pixels.