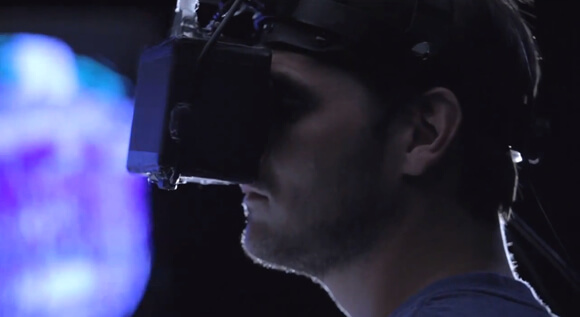 Palmer Luckey is a young guy from California, smart as a whip, and obsessed with virtual reality. After amassing a serious collection of the day’s top virtual reality tech, he realized nothing came close to the Matrix-like experience he wanted. So, he decided to build it himself. Say hello to the Oculus Rift, the virtual reality headset that’s got the tech and gaming community abuzz.

The Rift really took off after Luckey showed an early prototype to gaming legend John Carmack last year. Carmack liked it. A lot. He demoed a very early device for journalists—to great fanfare—offered to make Doom Rift-compatible, and featured the headset in his August QuakeCon keynote.

At about the same time, Luckey launched the Oculus Rift Kickstarter. The Kickstarter attracted 9,522 backers and $2.4 million dollars—ten times the $250,000 goal. The hype machine was already spinning so fast by last August that Carmack felt it necessary to tap on the brakes in his QuakeCon keynote by warning folks, “It’s not the holodeck.”

Before getting to what it is, what isn’t the Rift? The Rift isn’t a consumer ready virtual reality headset. The Kickstarter is for developers. The idea is that by getting the tech out to the gaming community, Oculus can begin to build broad game compatibility while getting professional feedback on the hardware.

But even as Carmack sounded that cautious note last summer, he added, “There’s a clear sense that this is not the same class as what has gone before.” Other professionals seem to agree it’s got a lot of potential. The Rift has the excited endorsement of thousands of developers on Kickstarter, gaming firms like Epic Games, Valve, and Unity—and this 90-year-old grandma:

How is the Rift different from prior attempts at head mounted VR?

Instead of a 30- or 40-degree field of view (a screen with edges), the Rift offers a 110-degree field of view. There’s no discernible edge to the Rift’s curved 7”, 1280 x 800 display. The screen is split into 640 x 800 halves, lowering the resolution per eye, but allowing the world to be rendered stereoscopically—that is pairing two side-by-side images viewed from slightly different angles (parallax) to make things appear 3D. You’re fully immersed in the game-world.

The headset uses a gyroscope, accelerometer, and magnetometer to translate head movements into changes in perspective in the virtual world. In the past, high latency, or how much time it takes the system to translate physical movements into virtual ones, has been a limiting factor. Carmack believes the “magic number for immersive VR” is 20 millisecond latency. Get it faster than 20 milliseconds, and humans can’t detect a delay.  (For more detail, check out this dense meditation on VR latency on Carmack’s blog.)

The Rift’s latency from head movement to game engine is down to 2 milliseconds, thanks to a proprietary chip (as opposed to the off-the-shelf sensor used in the early prototype). But total latency is still above that 20 millisecond threshold, in large part due to how long it takes the LCD screen to update. (Improving screen technology, made cheaper and in smaller form factors, will likely improve this lag in coming years.)

Resolution is a consistently noted drawback to the Rift. And it still only allows for head tracking, as opposed to full body position tracking. You can’t move your hand in the real world and see it in the virtual world.

But neither is doomed to remain a major stumbling block. Compact displays are moving to higher resolution at lower price points.

And as for body tracking, although Carmack says the old Kinect added too much latency, maybe the newly released Kinect 2 would work better. Or maybe a custom version of Leap Motion’s super high-resolution (1/100 mm) gesture tracking technology would pair nicely with a set of VR goggles. (Any developers happen to get both?)

It’s hard not to want an Oculus Rift in your home, like right now. But there’s no word yet on the consumer version—only “we’re working tirelessly to make it available as soon as possible.” The firm has shipped 6,000 developer kits and aims to send the other 1,500 out by the end of May. The all-important developer phase will likely go through the end of the year. And well it should. Anticipation and expectations will be sky-high, and delivering that first, jaw dropping moment at home will be critical.