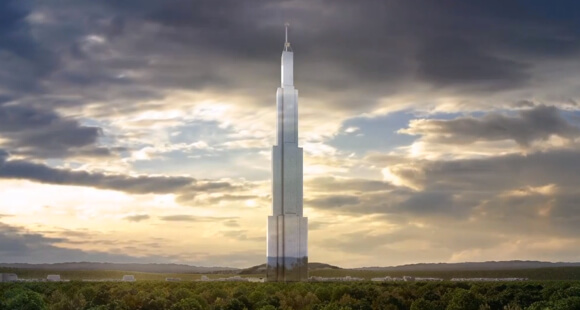 China has ten cities bigger than New York. Almost half of the world’s 20 tallest skyscrapers under construction today are in China. Naturally, China’s builders are chomping at the bit to get things done, like yesterday. But no one can erect the tallest skyscraper on the planet in three months…right?

We may find out later this year. Broad Sustainable Building (BSB) says its Sky City scraper will hold the title by the end of 2013—and they haven’t even broken ground.

BSB first announced its intentions to build a skyscraper taller than Dubai’s Burj Khalifa last year. The plan was to break ground in December, pending approval from the central government. It took as long to get the paperwork done as it would have to build. But no more waiting. BSB has the green light to begin construction in June.

Readers with a viral video habit may have heard of BSB or at least seen what they can do. The firm builds prefabricated parts offsite, transports them to a chosen location, and raises the final structure lightning quick. It’s a matter of process and pre-assembled parts packed with bolts in place and snapped together on site. In 2011, they raised a 30-story apartment building in 15 days. The time lapse is surreal.

The Burj Khalifa took five years to finish. But for Sky City, BSB will fabricate the parts offsite over four months and spend three months erecting the building on location, at a pace of five stories a day.

Once finished, Sky City’s 11 million square feet will host a school, a hospital, offices, and apartments and hotel rooms for 30,000 people. Residents can take one of 104 elevators or a six mile ramp curling around the interior to access courtyards with basketball, swimming, tennis, and theaters. The walls will provide 900,000 square feet of vertical farming space. It’s to be a skyscraper city.

Sky City will be an incredible feat if safely completed on schedule. Not only will the building go up ridiculously fast, its projected cost of $628 million is roughly half of the Burj Khalifa’s cost ($1.5 billion). But you’re forgiven for a touch of skepticism. A 30-story building is an altogether different beast than a 220-story, 2,750 foot colossus.

Head of Structures for WSP Middle East, Bart Leclercq, told Middle East Architect,  “I don’t think it’s possible to build [an 838m tower] as quickly as they claim. If they manage to build this structure in three months then I will give up structural engineering. I will hang my hat and retire. I will be eating humble pie as well.”

Leclercq likes the idea of prefabrication but says concrete poured onsite in tall buildings provides stiffness, and the time it takes concrete to cure is non-negotiable. He thinks the five-year mark set by the Burj Khalifa is about as good as it gets with current techniques and technologies.

Meanwhile, BSB says Sky City’s planning involved engineers who worked on the Burj Khalifa; that they’ve engineered the building to withstand 9.0+ earthquakes; that 10 government assembled research groups have looked over the plans; that they’ve tested scale models in wind tunnels.

My sense is there’s a lot of hype and confused information on this one. Given the audacity of the proposal and the delays to this point, it may simply be a matter of wait and see. We can say that prefabrication likely has great efficiencies to be learned and applied, even if it doesn’t happen on the grandest scale. And however long it takes to erect Sky City—if and when it happens—we look forward to the time lapse video.