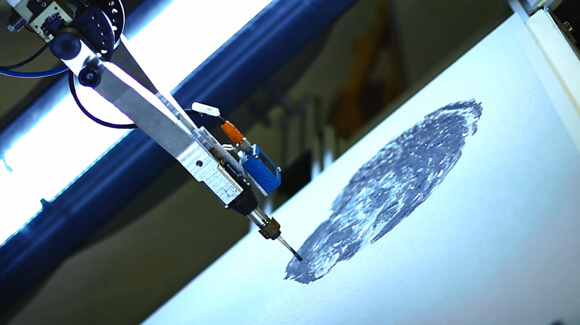 If there were a Turing test for artificial creativity (AC)—e-David might well be on its way to passing. The robotic system, built by researchers at the University of Konstanz in Germany, employs a variety of styles to produce paintings remarkably similar to their human counterparts.

However, although e-David’s paintings look human, the system itself isn’t remotely creative. There is, of course, a team of researchers in the background pulling the strings. E-David’s robot arm is a standard assembly line welder; the computer is a standard computer; the camera a standard camera—the magic is in the software.

The robot sets down a series of brush strokes then takes a picture. E-David’s software analyzes the picture, comparing it to the image it’s trying to duplicate, and determines where to shade and color, then plans and executes a new set of brush strokes. Following each set, the system takes another picture and repeats the process, further refining the painting with each iteration.

E-David can work in black and white or dip its five brushes in a pre-mixed palette of 24 colors, cleaning them as it goes. Because the robot is using paint and brush, the process lacks minute control, and the final products seem to display that perfectly imperfect quality we generally associate with human works of art.

The researchers behind e-David want to push the boundaries of machine learning, but also push our definition of art: “The results might even influence our perception of what art is—besides the imitation of existing drawing styles (imagine what Seurat would have been thinking about a robot that helped him with the millions of dots) the machine might enable new techniques since labor plays no role any more. This way very complex visual art works can be created.”

Watch e-David in action below and go here to view a display of its paintings: