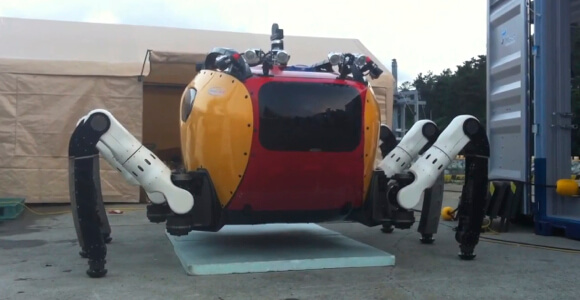 As six-legged robots go, other than its nifty red and yellow paint job, the Crabster robot has a pretty standard look. It isn’t the biggest hexapod, like the impressive two-ton Mantis, or a tiny hexapod with a weird gait, like Boston Dynamics’ RHex. What makes Crabster special isn’t so much what it is but where it will walk—the robot was designed to navigate the seafloor.

Ocean researchers already use both autonomous and remote-control undersea vehicles, but propulsion systems tend to kick up sediment, adversely affecting visibility, and lack the power to deal with strong currents.

Crabster’s creators designed the robot to solve these problems. Developed by the Korea Institute of Ocean Science and Technology (KIOST), the robot can withstand heavy currents by changing its posture (roll, pitch, and yaw), and the robot’s measured gait won’t significantly disturb sediment.

Crabster is lowered to the seafloor by crane and remains attached to an umbilical for power, limiting where it can go but allowing for continuous operation. Four operators remotely drive the robot from the surface—directing and monitoring its movement, manipulators, cameras, lights, and sonar.

On the seafloor, the half-ton robot illuminates murky water with a spotlight, records what it sees with ten onboard cameras, and uses its two front legs to pick up and manipulate objects. Researchers hope to send Crabster to explore shipwrecks where they can return small treasures in the robot’s retractable tray. They’ll haul larger objects by attaching a tow cable connected to the vessel above.

Crabster recently took its first dip in the ocean and will soon head out to sea to begin work 200 meters below the surface. Eventually Crabster’s engineers hope to give it an onboard power source, and we imagine future iterations might combine the best of both worlds—a Crabster that folds its legs to go swimming and, when a stroll better suits its purposes, deploys its legs for a landing on the sea-floor.

Check out Crabster’s moves, maiden voyage, and full concept video below, and go here for the full Crabster YouTube experience.