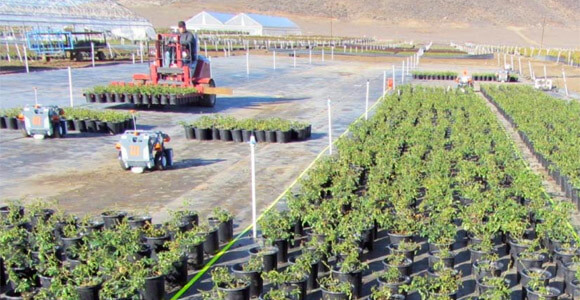 If you were starting a robotics company, what would you build a robot to do? You could build one to master a particular form of motion, to prove a point. Or you could build one to perform a task that’s impossible for a human to perform, such as explore under the ocean. You’d end up with something sexy but expensive and only useful to a handful of institutions. And unless you had a contract with a well-funded national military, you’d probably be out of business pretty fast.

Harvest Automation has built a robot to do something that’s neither difficult nor sexy: move potted plants around in nurseries and greenhouses. It’s a task the Boston-based company decided to tackle with its first robot, dubbed Harvey, not because humans can’t do it, but because they don’t.

Potted plants don’t sound sexy and they’re not where pundits expected robots to move into agriculture, but worldwide they are a $50 billion industry. And before a plant or tree goes on the shelves of Home Depot or a local garden store, it has been moved around a lot. Young potted plants are packed in close together; then as they grow, they’re spaced out. In the winter, they’re packed in again. In other words, moving plants around is constant work, and one there are few migrants or other low-end workers to do.

To make Harvey, or the HV-100, salable, Harvest Automation built the robot almost entirely from off-the-shelf parts. A single robot sells for $30,000, while an unskilled human laborer earns about $20,000 a year, according to the Bureau of Labor Statistics.

Here’s how it works. The user tells Harvey which size pot to look for, and the robot looks for it using a LiDar sensor, which detects three-dimensional geometry. Harvey’s robotic arms, designed to carry round things, pick up the plant. Next, the machine looks for a guideline, which is made from reflective tape provided by Harvest Automation. One of Harvey’s proprietary parts is a sensor that can find the guideline in lighting conditions ranging from full sun to full dark. Harvey follows the guideline until it reaches the moved set of plants. It puts the plant down according to a pattern — if the plants are five feet apart, it will put the plant down five feet away from the last one. At this point, the robot’s “seek plant” command is re-triggered, and the process begins again.

It’s not glamorous, but Harvey can perform this task on gravel or other uneven terrain, and in rain (or sprinkler spray) or sun, light or dark.

“The robots were designed to work outside in the tougher terrain conditions,” said Kawola. 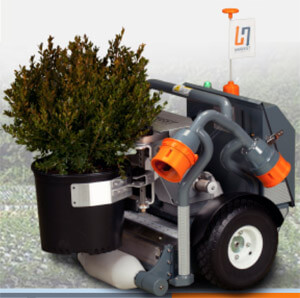 Unlike the enormous industrial robots of yesteryear, today’s robots are designed to be safe for use around humans. Harvey simply pauses if it detects a human in its path. And because the machine weighs 90 pounds and stands just 21 inches high, Kawola figures the most damage it could inflict if it failed to stop would be a bruised ankle.

With about 10 U.S. buyers of fleets of HV-100s, Harvest plans first to try to begin selling in Europe, where the potted plant market is twice as big as in the U.S., beginning in early 2014.

As for a robot that detects ripe fruit and picks it, Harvest Automation isn’t yet eying such a thing, even though berries are big business and picking them is backbreaking work.

“We think it’s a stretch in the near term,” said Kowala.

Instead, the company expects to leave people with “the high-value work” of picking the ripe berries and to task its next crop of rough-terrain robots with moving up and down the rows collecting the berries to streamline the collection process. It’s not sexy, but it just might sell.