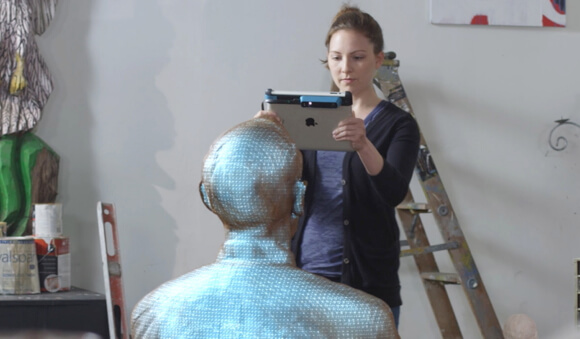 Three days into its Kickstarter, app developer Occipital had raised just under $600,000, or roughly six times its $100,000 goal—which, incidentally, was met in the first three hours. What’s got early adopters and developers so excited? A 3D scanner called Structure that attaches to and runs on an iPad.

In the past, Occipital focused on developing apps. But from RedLaser, a barcode scanner and comparison shopping tool, to 360 Panorama, an app that stitched together panoramas taken by smartphone cameras—computer vision was the common theme. 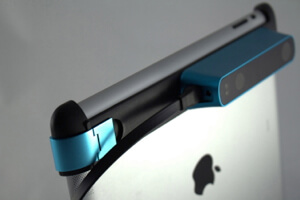 Structure is a relatively small aluminum device that clips on to an iPad. The device carries two infrared LEDs and a camera onboard, and further makes use of the iPad’s native camera, gyro, and accelerometer. It synthesizes all this data to model and measure its surroundings in 3D with a range of 40 cm to 3.5 meters.

Structure can model one item—like other scanners on the market—or it can model an entire room of items. There’s no size limit, as there is with desktop scanners, and Structure is as mobile as a tablet.

What might you do with such powers? Well, obviously, you can scan objects and send them to a 3D printer. But you can also scan a room and all its furniture, automatically making note of its dimensions.

From there you can play with the room’s contents, virtually rearranging them, instead of breaking your back on bad configurations. Or you can figure out whether a new item, say, a couch, chair, or piece of art will fit where you think it will. 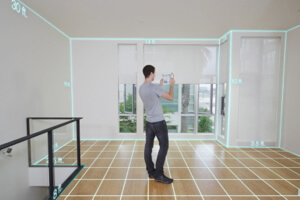 Occipital says they created Structure as much to 3D print or model as they did to allow developers to write for augmented reality. Occipital developed a simple example—a cat that plays fetch—to demonstrate how programs can be taught to obey real world rules, disappearing under tables or jumping up on a couch.

Occipital says they could have funded their initial run internally, but they’re using Kickstarter to gauge interest and to get the system into developer hands (for $349). While the prototype is only iOS compatible, Occipital made it adaptable to other operating systems and even devices with different dimensions.

Structure joins a growing family of 3D scanning devices available for the casual enthusiast or maker, sitting between MakerBot’s $1,400 3D scanner and Autodesk’s free 123D Catch. The former is a desktop device, while the latter uses naught but a smartphone camera.

Structure will be a quarter the cost of the Makerbot scanner and more maneuverable. It’s obviously more expensive than 123D Catch, but because of additional sensors, can make higher quality scans. And of course, it’s far more convenient than taking upwards of 40 pictures per scan in 123D Catch. Beyond scanning single items, Structure sweeps entire rooms, something neither Makerbot nor 123D Catch can do. 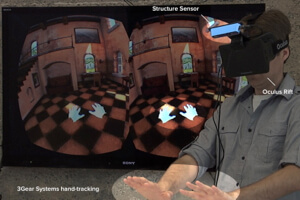 There are other handheld scanners on the market—though only recently are prices dropping below $1,000—and in September, another mobile 3D scanner, Fuel3D, successfully funded its Kickstarter.

But unlike other handheld scanners, Structure’s iPad compatibility may extend applications beyond 3D printing. They’ve even got photos of the device hooked onto an Oculus Rift to image the user’s hands.

Even so, the market is filling out nicely. It was only a year ago that Matterport CEO Matt Bell, also a maker of handheld 3D scanners, predicted 3D modeling devices in tablets. The next step? Further miniaturize and embed the tech in smartphones and tablets—we’ll get back to you on that one next year.

Check these videos out to see Structure’s augmented reality potential: