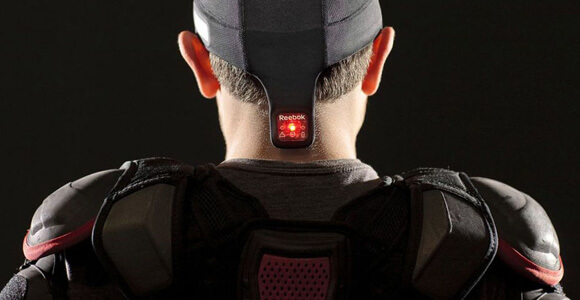 In the world of tech, wearable devices are a hotbed of innovation. In the world of clinical medicine, their equivalent may be the changing understanding of head trauma and concussions.

The Boston-based electronics company MC10 sits at the intersection of these two hot topics. The company has kept a low profile, but its products are garnering a lot of interest. Its Reebok-branded skullcap that measures head trauma will be spotlighted at this year’s Consumer Electronics Show in Las Vegas. And Colts quarterback Andrew Luck has joined MC10’s athletic advisory board.

Called Checklight, the $149 skullcap is designed to be worn during athletic activity. Reebok designed the cap, incorporating MC10 electronics that include a tri-axial accelerometer to measure linear acceleration, a gyroscope to measure rotational acceleration and a microprocessor that analyzes the data.

If the impact of a collision nears a pre-programmed threshold, a yellow light blinks; a red light blinks if the impact clearly exceeds the threshold. The lights signal that a trainer or doctor should assess the athlete before s/he re-enters the game, since it can be difficult for players to  gauge the seriousness of an injury amid the hurly-burly of competition. Checklight also tallies the total number of impacts. 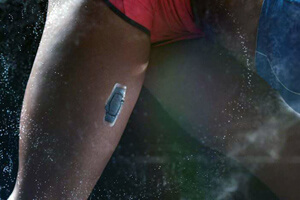 There are lots of wearable products out there. Most are small and clip easily onto clothing, but they’re as rigid and fragile as electronics ever were. Even Samsung’s hyped curved-display phone looks an awful lot like a conventional smartphone.

Few if any other wearable devices could withstand a football game attached to one of the players, but MC10 is proof that more will come.

“At MC10, we are passionate about raising the bar when it comes to making technology truly wearable,” said CEO Dave Icke.

The company also makes a hydration-sensing Band-Aid that the wearer scans with a smartphone to know when it’s time to drink more water and how much, and urinary and cardiac catheters that include integrated sensors that collect a range of biological data. 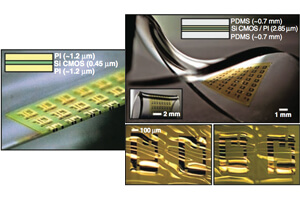 You may also have heard about electronic tattoos. MC10 is also developing those. Its technology powers the Motorola password-replacing tattoo that earned a lot of press last spring. The company is also looking into cosmetic and dermatological applications, such as notifying a user when to reapply sunscreen. (Laugh if you will, but people spend a lot of money on their skin as they age.)

All of MC10’s products trace their origins back to a 2008 research paper by co-founder John Rogers, a materials scientist at the University of Illinois. In the paper, Rogers laid out a method for making electronics that work even while being stretched and bent. The method uses nanoribbons of silicon and passive electronics on an ultra-thin plastic base.

So far, just the Checklight is on the shelves in retail stores. But as other companies develop their own flexible circuitry, wearable computing is likely to start looking less like goggles and more like plain-old clothing.