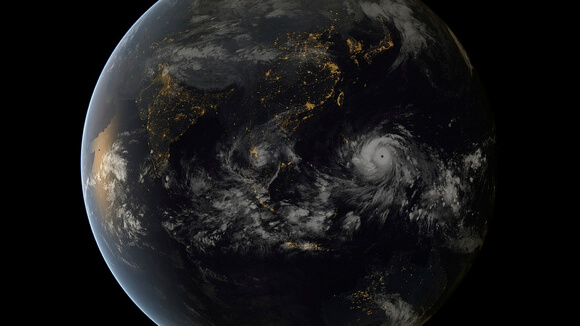 Autonomous robots are plumbing the ocean’s depths with increasing regularity. This hurricane season, a research project coordinated by Rutgers University (GliderPalooza) deployed over a dozen sea drones to take a snapshot of the mid-Atlantic ocean.

Ocean-going robots can go where humans can’t. They’re cheaper than ships and more dynamic than buoys. Combined with these and other traditional data sources, like satellites, scientists are piecing together an increasingly complex map of the ocean.

“We’re seeing the ocean like we haven’t seen it,” Michael Crowley, a participating marine scientist from Rutgers, told the New York Times.

In addition to cost and maintenance benefits, the project’s drones, mostly a variety called Slocum gliders, aren’t restricted to surface data—they can produce a more fully three dimensional image of the ocean.

Each $125,000 to $150,000 drone dives in an arc 650 feet beneath the surface to measure conditions like salinity (salt content), temperature, and oxygen. The battery-powered drones are slow but low-energy, taking in and expelling seawater to change their depth—this vertical motion is converted into forward motion by the drone’s wings.

Surfacing every two to three hours, each drone relays data by satellite to mission control at Rutgers. They can stay at sea, operating autonomously, for months at a time.

Because these rugged robots can handle harsh environments humans can’t, they’re able to collect important and elusive data, like water temperature inside a hurricane–a key driver of storm intensity.  “The ocean is your heat driver. It’s your engine for hurricanes,” Travis Miles, a Rutgers PhD student, recently told Salon.

“In Hurricane Sandy, you can see the bottom temperatures off of New Jersey went from 10 degrees Celsius to near 18 degrees Celsius,” Miles said. Cooling water temperatures during Hurricane Irene, on the other hand, made the storm less intense as it approached land. Such information may in the future help us better prepare for storms.

Though there were more gliders in the Atlantic this hurricane season, the season itself was historically quiet. Meanwhile, in the Pacific, where the team is planning to deploy more gliders, Typhoon Haiyan wreaked havoc in the Philippines.

Beyond GliderPalooza, other ocean-going robots are contributing data.

Argo is an internationally funded net of ocean-going robots. Like the Slocum gliders in GliderPalooza, Argo’s simpler robotic “floats” also dive for data. But Argo’s $30,000 bots are cheaper, go deeper (6,500 ft), and span the world’s oceans. The Argo fleet reached a target 3,000 deployed floats in 2007 and notched its millionth data point earlier this year.

In perspective, that’s more data in just a few years than was gathered by ship throughout the entire 20th century. The more we know, the better our models, and hopefully, the better our ability to forecast extreme events.