NYU’s Leif Ristroph wanted to design an exceedingly simple miniature flying robot. Instead of finding inspiration in insects, he turned to the jellyfish, a water-dweller. Whereas insect-like bots require heavy processors and sensors to stay stable—lacking a brain, jellyfish are still efficient, elegant swimmers.

Ristroph’s robot is as dumb as a jellyfish and similarly simple and efficient.

The robot does away with the sensors and heavy processor of an insect-inspired bot. It’s four carbon-fiber wings pulse in the air like a jelly in the water. And although he doesn’t fully understand why, the principles keeping jellies stable hold his robot upright, too.

Insect-inspired flying robots include Harvard’s RoboBee and Festo’s dragonfly BionicOpter. But Ristroph thinks we need to think outside the box—the most direct model (like insects) may not be the best. 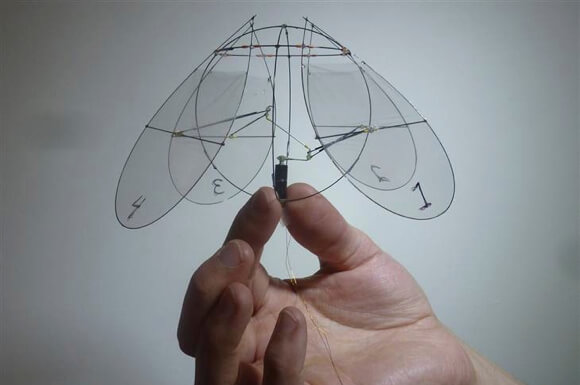 “So far, there’s only been this one idea of ‘let’s copy insects,’ and we know from the airplane that we didn’t copy birds,” Ristroph told the Christian Science Monitor. “I mean some people tried that, but there’s also lots of other ideas that we tried.”

Ristroph’s robot fits in the palm of a hand and weighs about as much as two paperclips. Lightweight as it is, the robot is still tethered. He’ll need to add a battery (and weight) for untethered flying. Even so, Ristroph thinks they would cost as little as $0.50 and could be deployed to monitor atmospheric conditions or sold as toys.

He admits they might make sense in surveillance situations for the military—a prospect he’s not entirely comfortable with—but that peaceful applications might more than outweigh any negative uses.