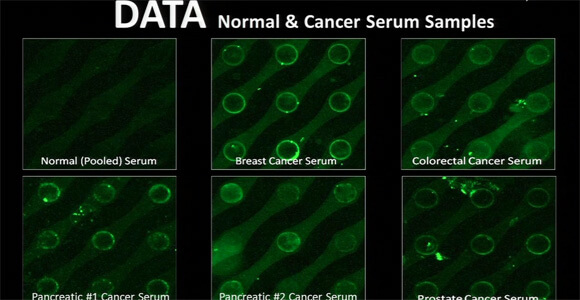 As genetics reveals the incredible diversity among cancer cells, researchers have largely given up pursuing a silver bullet to cure all types of cancer. Instead, many have begun searching for the next-best thing: a silver bullet test to diagnose all cancers. The test would look for markers of cancer in the patient’s blood, where the process of tumor-making leaves a trail that can often be picked up before tumors are big enough to spot.

And early diagnosis makes a big difference in survival rates. When cancer is found in Stage 0, as it’s just getting started, or in Stage 1, it kills only 10 percent of patients, regardless of what type of cancer it is, for the most part. Many of the cancers we know as the deadliest are so known because they are rarely found in earlier stages.

Blood is also much easier to get than tumor samples, which have provided the bulk of the genetic information researchers have acquired on cancer cells.

There are various types of nucleic acid in the blood stream that can belie cancer, and the research challenge is how to find and identify them without running the cost up so high that the tests become useless as the general diagnostic tool they hope to be.

“Right now, in terms of a universal cancer blood test, there is none. There are many people looking at that. People are trying to isolate that specific particle using different methods,” explained Raj Krishnan, the founder and CEO of Biological Dynamics, one company trying to be the first to offer a comprehensive cancer diagnostic test based on a blood sample.

There are a few cancers that have been linked to specific biomarkers and tests have cropped up to measure those, but the prize is a test that would detect any and all cancer by identifying signs of out-of-control cell division. Biological Dynamics uses an electric chip to separate cells from cell-free DNA. Too much cell-free DNA can mean some other  major health issue (or pregnancy); amplifying and sequencing the DNA provides more information about what the issue is — and, if it’s cancer, what kind.

The test requires a single drop of blood and takes 15 minutes.

“We’re trying to do a better, faster, cheaper model, and make it something that would be truly universal, to democratize the cancer screening process by making it less expensive,” Krishnan said.

Biological Dynamics’ test, and those of several competitors, is currently being used to monitor patients’ responses to cancer treatments. This initial use case allows the companies to amass more data on the accuracy of their tests, while shying away from potential legal issues that could stem from something as serious as potentially misdiagnosing cancer.

A recent study found that circulating tumor DNA gave an earlier indication of how breast cancer patients were responding to treatment than screening for cancer antigens or conducting CT scans.

Because each cancer has been traditionally handled as an individual disease, the FDA currently requires that blood tests show their efficacy cancer by cancer, Krishnan said.

So it may be a while before healthy people see cancer blood tests as an option. But if the research continues to show that they’re accurate, the tests could deliver huge gains in cancer survival rates by simply finding more cancer sooner.