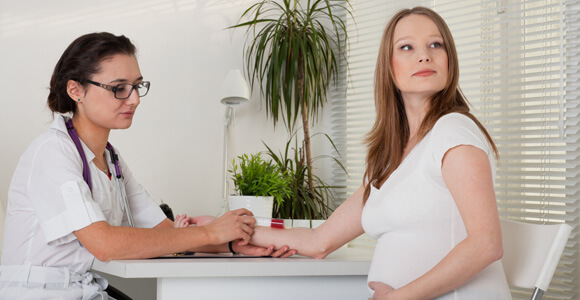 The vast majority of expectant parents want to test their baby-to-be for major genetic defects. But the most common testing methods, amniocentesis and CVS, pose a risk to the baby: Amniocentesis, for example, triggers miscarriage once in about 400 cases. As a result, doctors and parents often forego the tests unless there are clear risk factors.

A low-risk, accurate test for genetic diseases would be the medical equivalent of having your cake and eating it, too. Which is why an emergent fetal DNA test method that only requires a sample of the mother’s blood has got many people excited. And the method just took a major step towards mainstream adoption earlier this month when it became part of California‘s prenatal screening program, the largest prenatal screening program in the world.

“California is the first state to prioritize broad non-invasive prenatal testing as a secondary screening option for high-risk pregnant women,” said Vance Vanier, M.D., the vice president of global commercial operations at Verinata, whose test is one of those being offered in to women in the state.

Non-invasive prenatal testing, or NIPT, is the name being used to refer to tests that sequence fetal DNA found in the mother’s blood. The icing on the cake (the one we’re eating and having, too) is that DNA tests are 99 percent accurate, which is a few percentage points better than existing screening methods. The DNA testing can also be performed several weeks earlier than the other methods, giving expectant mothers more time to deal with potentially negative results.

The test looks for fetal DNA in the mother’s bloodstream. As fetuses develop, both they and the placenta shed cells, which are carried away in the mother’s blood. Requiring just a blood sample from the mother, the prenatal tests employ next-generation sequencing methods to search for two distinct DNA signatures and focus on the fetal sample.

The fetus’s DNA is sorted by chromosome, and if one section is under- or over-represented, that suggests an abnormality.

Four California companies are behind the technology being used in the screening program: Sequenom, Panorama, Ariosa and Verinata.

Ariosa and Verinata were founded by academics Jay Shendure and Stephen Quake, respectively. The two independently demonstrated that the fetal genome could be sequenced from the mother’s blood. Earlier research had outlined how to do that for particular ethnicities; Shendure’s method initially required saliva from the father, which isn’t always possible.

Sequencing the fetus’s entire genome from the fragments mixed with the mother’s blood is still too expensive to be done under normal conditions, so the tests being used in California screen just for chromosomal disorders — including Edwards, Patau, Turner and Down syndrome. Such problems are easier to “see” than those based in a single gene.

Eventually, however, the so-called NIPT tests will almost certainly be cheaper than conventional tests because the costs of DNA sequencing continue to fall. And unlike the risky physical procedures now done by obstetricians, the DNA tests only require a lab technician to draw the blood.

Of course, used to their full capabilities, the tests could enable some troubling decisions. They already check the sex of the fetus, which is determined at the chromosome level, and they screen for other sex chromosome abnormalities. Some of these have medical implications, but others don’t and otherwise go almost entirely undiagnosed. And as DNA sequencing becomes even cheaper, expecting parents may increasingly opt to see the entire genome of the fetus, sex, eye and hair color and disease risks.

However many parents eventually veer down that path, one thing is for sure: Most currently want to rest assured that their child will be born free of major genetic defects.