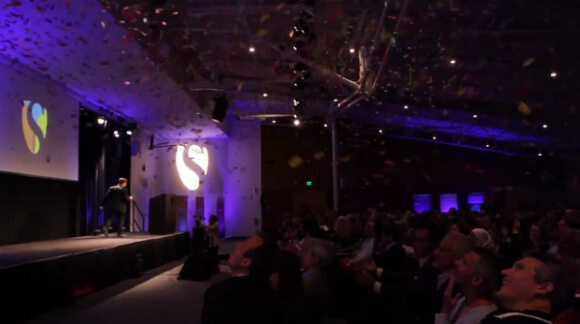 Over the weekend, the latest graduates of Singularity University’s Graduate Studies Program presented their proposals for using accelerating technologies to solve major world problems. The exhibition offered a sneak peek at the kinds of innovations that may hit the market two to five years from now.

A little background: The Graduate Studies Program, now in its fifth year, puts a highly qualified class of entrepreneurs from all over the world — this year 40 countries were represented — together for fast-paced 10-week program. The participants first get expert instruction on accelerating technologies; then, they’re asked to propose startups that use those technologies to solve global problems, with the scale to affect a billion people in 10 years.

Proposals from previous years, such as Getaround, have already become successful companies.

As in any class of startups, the Graduate Studies Program class of 2013 had some swing-and-misses and some real cracks of the bat. All of the companies hope to go on to become vibrant companies. But even the best ideas will have to prove themselves commercially first. Some will stay at Singularity University to be incubated through Singularity Labs.

The projects that generated the most buzz out of the gate this year — including patent-filings and high-profile partnerships — were medical applications. What follows are highlights; the full list of proposals is available on the Singularity University website. 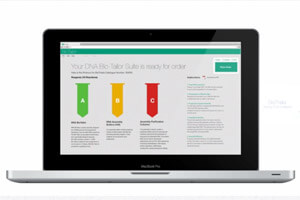 BioThalia, a team with expertise in microbiology, computer science and math, hopes to drive advances in medicine and agriculture by making it faster and cheaper to edit DNA.

“We’ve become good at reading DNA quickly and cheaply, but we’re still in the dark ages when it comes to editing DNA,” said Carina Namih, who presented the project.

BioThalia plans to market a kit that consists of three nanomachines sitting in three vials filled with millions of short strands of synthetic DNA. The researcher can specify what the machine will do to the DNA using an online interface, and it does it automatically.

Synthetic DNA is much cheaper to produce than cloned DNA, but it can only produce relatively short strands of genetic material. Biotech researchers deal with high failure rates in generating the DNA they want, running up the cost and time it takes them to test each hypothesis. By streamlining the process and bringing its price down thanks to the programmed nanomachine, BioThalia hopes to speed the pace of scientific breakthroughs.

The company would pre-program the nanomachines to do what a particular researcher needs done. The machine would then do its task automatically, accomplishing overnight what it would take a researcher weeks to do by hand. The technique would also make it possible to obtain longer strands of DNA using the cheaper synthesizing method. 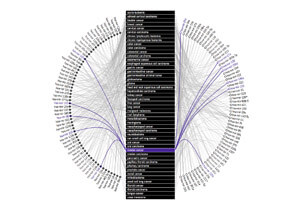 MirOculus, with a team that includes biomedical and biotech researchers an M.D. and a computer scientist, offers a medical screening for 48 types of cancer that requires just one drop of blood.

The screening builds on the research into cancer and microRNA. MicroRNA, or miRNA, helps regulate cell activity, and cancer cells slough it differently than healthy cells. Indeed, different types of cancer generate their own unique patterns of miRNA.

MirOculus has devised a screening method that looks for such patterns using fluorescent light. Some of the cancers that can be found this way, such as ovarian cancer, are often currently discovered in late stages. MirOculus’s screening kit worked in early tests, but it will need much more testing and regulatory approval before it reaches hospital labs.

Other projects sought to bring medical breakthroughs to the masses by developing low-cost screening approaches that built on developments in microfluidics. 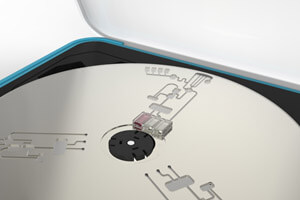 The project seeks to improve medical care by ease the burden of constant trips to the hospital on patients who suffer from diseases that must be monitored with blood tests. More than a billion of such tests are performed worldwide each year, and some patients in developing countries have to make long journeys to the nearest hospital to have them done.

BluBox would put a $100 repurposed DVD player in each of their homes. The patient would prick his or her finger and load the blood into a tiny cartridge, which snaps on to a $10 disk. By loading the disk into the “player” and hitting play, the patient performs a basic slate of blood tests at home.

The spinning DVD acts as centrifuge, sorting the blood cells into microfluidic channels. BluBox has also hacked the blue ray light to identify fluorescence markers in the blood and to peer down into it at the cellular level. An accompanying Android app sends the information to doctors to be interpreted and communicates results to patients. 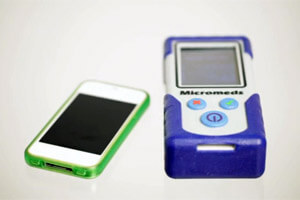 A million people die of malaria each year, and efforts to wipe out the disease are stymied by current tests’ failure to identify carriers of the disease, who generally have low counts of the virus in their bloodstream but can still infect others bitten by the same mosquito.

The U.N. has said of the problem, “We are fighting a disease we cannot see.”

Micromeds has created a more accurate instant test for malaria that uses microfluidics to sort out malarial cells, so that even small viral loads can be detected. The hand-held device costs about $100, and is designed to work in high heat and humidity. It instructs the test administrator with a simple graphical interface, so even those who are marginally literate can provide the testing. Results are uploaded to the cloud, which allows global tracking and also powers automatic SMS messages to those who test positive, reminding them to take medications.

Not all the projects were medical, of course. For instance C-Cool proposes to use food and garden waste to generate the a cleaner form of charcoal and reducing emissions of the potent greenhouse gas methane in the process. Charcoal is required to manufacture the silicon that powers all of the world’s computerized equipment. Silicon Organics would harvest rice husks in countries that grow rice to use for electricity or to make silicon. (Rice husks contain a lot of silicon, which also makes them unsuitable to be fed to animals.) Finally, Datafly would manufacture low-cost, rechargeable drones to help farmers in Latin America implement precision agriculture techniques.

If you’ve got innovative ideas for solving major world problems with technology, Singularity University will begin accepting applications for the the 2014 Graduate Studies Program in a few weeks.