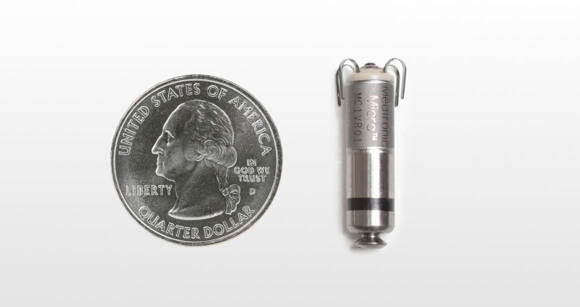 Back in November, we wrote about a tiny pacemaker made by Silicon Valley startup Nanostim. Whereas traditional pacemakers require chest incisions and a surgical pocket to implant the device in—the Nanostim pacemaker is implanted by making a simple incision in the thigh and snaking a catheter through an artery to the heart.

It’s a less invasive procedure, and in most cases, less invasive means fewer complications. Nanostim was approved for use in Europe, subsequently acquired by St. Jude Medical—and now it has competition. 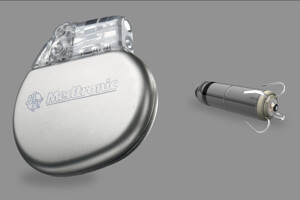 Medtronic recently announced they’ve successfully implanted a similar device, the Micra TPS pacemaker, into the heart of an Austrian patient. The device, roughly the size and shape of a multivitamin, is a tenth the size of a traditional pacemaker and 30% smaller than the Nanostim pacemaker.

Like the Nanostim device, the Micra is implanted in the wall of the heart by way of a minimally-invasive procedure through the femoral vein in the thigh. Once implanted, the device’s prongs make contact with the heart to deliver pulses of electrical current to correct irregular heartbeats.

We first caught wind of the Micra back in 2011 when Medtronic’s Stephen Oesterle showed off a prototype at TEDMED. While the device was largely designed and built—it was still lacking a good power source and regulatory approval.

Today’s device, however, is equipped with a ten-year battery. And as for regulatory sign-off, the recent Austrian operation was the first of a global human trial of the technology. Medtronic says they’ll test the pacemaker in 780 patients and expect first results in the second half of 2014.

Whether its Medtronic or St. Jude, these next-gen pacemakers may reduce complications from pacemaker implantation, and the less invasive procedure may help patients recover more quickly. Notably, both devices do away with the wires, or leads, traditional devices use.

Smaller devices inserted through the thigh also avoid scarring to the chest and the noticeable lump most pacemakers make under the skin.

Dr. Clemens Steinwender, head of cardiology at the Linz General Hospital in Austria, told the StarTribune, “The combination of this novel technology with a transcatheter procedure can benefit patients by potentially reducing pocket or lead complications and recovery times observed with traditional ­surgical pacemaker implants.”