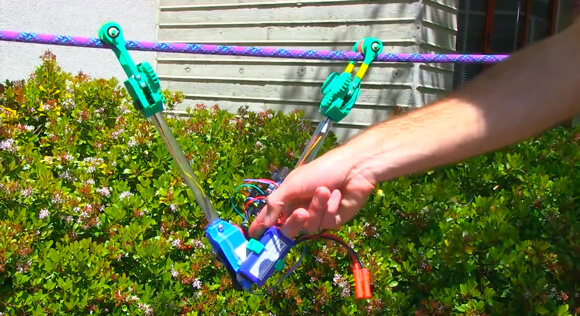 Nick Morozovsky, an engineering graduate student at UC San Diego, exemplifies how much you can do with how little these days.

His SkySweeper robot moves along cables like an inchworm, using naught but an Arduino microcontroller, a few 3D printed parts, and an off-the-shelf battery. Morozovsky thinks the robot could inspect power lines for a fraction of current costs.

SkySweeper has a simple v-shaped design. A motor at the robot’s elbow runs wheels on actuated clamps on either end. Onboard sensors in the elbow calculate the angle of the the robot’s two arms so the processor knows which direction to run the motor.

The robot carries a battery for power, but Morozovsky thinks future designs could inductively power themselves from the very lines they’re investigating. SkySweeper would then remain in the field for extended periods, sending data back to remote users.

SkySweeper is clearly still a prototype. For field use, the design would need to include necessary sensors and be tough enough to weather the elements for extended periods. And because patrolling but one section of line makes little practical sense, Morozovsky says he’s reinforcing the clamps so the robot can partially detach itself and swing past junctions.

A refined SkySweeper would use sensors to check power lines for damage and cameras to monitor tree growth for far less expense than today’s solutions.

According to Morozovsky, “Current line inspection robots are large, complex, and expensive. Utility companies may also use manned or unmanned helicopters equipped with infrared imaging to inspect lines.”

Another inspection robot, Line Scout, can cost tens of thousands of dollars. Morozovsky estimates his design would cost $1,000. Beyond power lines, Morosovsky thinks his design could also be used to inspect other key infrastructure, like bridges.