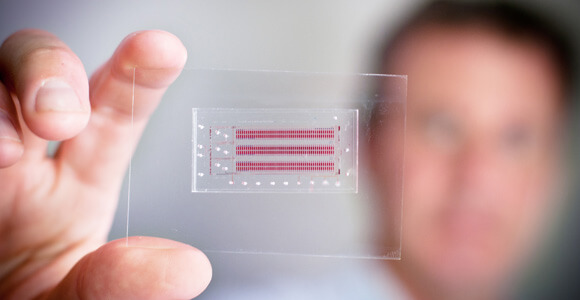 A credit card-sized chip can diagnose HIV infection and provide T cell counts to guide treatment, according to a recent paper in Science Translational Medicine. The fluid-processing chip provides accurate test results in less than 20 minutes using a single drop of blood that goes directly into the testing chamber and does not require trained handling.

The chip is designed to work in a battery-powered handheld device that would “deliver simple HIV diagnostics to patients anywhere in the world, regardless of geography or socioeconomic status,” the researchers say in the paper.

Nearly 7 in 10 HIV-infected people live in poor parts of the world. Many have to travel long distances to get to a clinic, making coming back for test results a major ordeal. 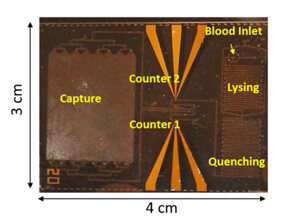 The chip, developed by researchers at the University of Illinois and Daktari Diagnostics, is enclosed in a small chamber. Because cells block electric current, passing a current through a tiny microfluidic pore causes the cells to essentially announce their size and shape. That’s enough to identify the cell by type, so the test can count CD4 and CD8 cells, types of T cells that indicate how healthy the patient’s immune system is.

CD4 counts allow doctors to diagnose initial HIV infection and monitor patients’ progression into AIDS as the virus kills more of the immune system’s fighter jets, leaving the patient vulnerable to disease. Decisions about which medications to take when are based largely on T cell counts.

The standard diagnostic method for CD4 counting, flow cytometry, requires a larger sample and takes place in a laboratory setting with trained personnel. 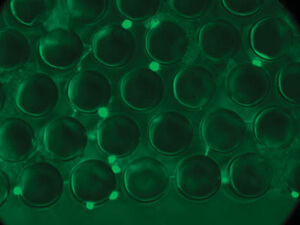 Advances in microfluidics are driving the invention of many portable medical testing devices. A portable HIV diagnostic test was shown to work in a 2011 study, but, unlike the current chip, it didn’t also provide T cell counts.

The device used in the study was tabletop rather than hand-held, but the researchers are confident that it could be shrunk to the size of a toaster or smaller.

Once in wide use, the reader would cost less than $1,000 and each test would run less than $10, according to project lead Rashid Bashir. The chip will be commercialized by Boston-based Daktari Diagnostics, of which Bashir and a study co-author are founding partners.