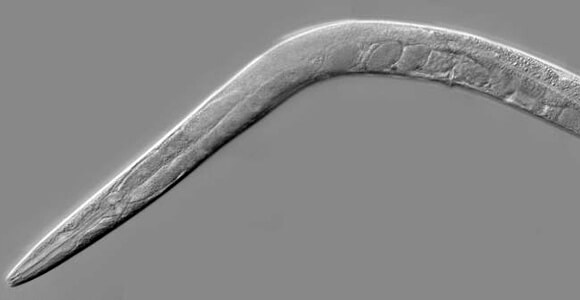 It’s a process as old as time, but there’s a twist: This worm is a bit of open-source software that encodes biological data gleaned from decades of scientific study into the nematode C. elegans. The parameters are programmed, but the worm acted on its own.

Why a worm? Well, the widely studied nematode was the first multicellular organism to have its entire genome mapped. With just 1,031 cells and 302 neurons, the 1 millimeter-long transparent worm is a manageable animal to recreate as a software-based artificial life form.

The simple life form nevertheless moves, mates, eats and even socializes, and replicating it using computer code may yield some biological insights into the biological bases for those behaviors.

The project built from the bottom up, translating data on cells, DNA, neural structures and so on into computer code, in the hopes of driving a simulation that would display the same behaviors as a naturally occurring worm. If the simulation goes wrong, finding the fix can lead to more conventional biological science.

“We’ve started from a cellular approach so we are building behavior of individual cells and we are trying to get the cells to perform those behaviors. We are starting with simple crawling. The main point is that we want the worm’s overall behavior to emerge from the behavior of each of its cells put together,” the worm’s makers, called the OpenWorm project, say on their website.

The project recently managed to get the digital worm to swim very much like a real nematode would.

The software nematode above is perhaps the first multicellular artificial life form to be fully simulated (though so far only movement has been executed), but software has been used since the early 1990s to establish systems that evolve on their own according to set parameters.

Early on, artificial life creators saw that the technique could be used to model evolution in order to obtain more data faster than nature’s epically (epochally?) slow processes can provide. Evolution remains the focus of much work in a-life, as it’s called.

Simulating processes, like evolution, can be a more rigorous scientific process than simulating an organism because the results are more definitive, Arend Hintze, a developmental biologist and geneticist at Michigan State University, told Singularity Hub.

“Doing computational research is rather hard: What you find doesn’t necessarily translate into the real world. When you get a simulation going, then technically you have the black box organism and another black box virtual organism: Just because they look the same doesn’t mean they are the same,” he said.

The a-life field is trying “to get away from stuff [like OpenWorm] that’s cool and looks great and invokes powerful emotion in us to stuff that’s really hardcore science,” Hintze said.

But he had to admit the that artificial worm is indeed cool and represents a major achievement.